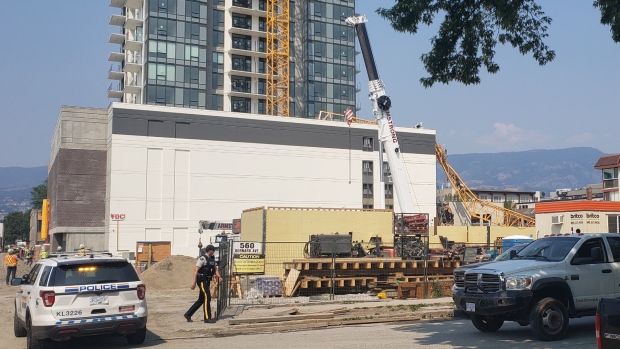 KELOWNA, BC – The body of a fifth man killed in a building collapse crane in Kelowna, BC, was recovered by a specialist search and rescue team.

The RCMP said the man was buried under rubble when the man’s arm was crane collapsed more than 25 floors on Monday and landed on the building where he worked.

Four other men died in the collapse, all workers on the high-rise construction project, while another was discharged from the hospital after mild treatment.

Boone says the specialized team was able to get started quickly with some stabilization work being done on the job site, where crews can now use heavy equipment to move parts of the crane that were still in danger of collapsing.

The collapse disrupted most of downtown Kelowna and prompted an evacuation order for the area.

The evacuation order remains in effect for apartments, businesses, and a retirement home near the crime scene due to the instability of the remaining part of the building cranebut police say it is hoped this will be lifted as soon as the crane will be dismantled.

An investigation into the accident is being carried out by the BC Coroners Service, the RCMP and WorkSafeBC, the provincial safety agency for workers.

The Mounties did not publish the names of the men killed.

This report by The Canadian Press was first published on July 14, 2021.