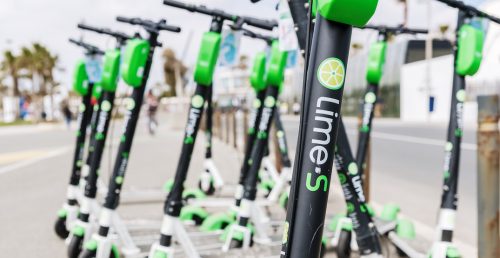 Without extending the approval process, Kelowna has taken on the provincial government’s pilot project that will enable participating local governments to adopt statutes that allow the widespread use of electric scooters.

By next week, several companies will jointly make at least 700 e-scooters available to the public for shared use as part of their app-based services.

This includes 500 e-scooters that were launched earlier this week by international micromobility giant Lime, which received an operating license shortly after the Kelowna City Council approved the statutes.

Toronto-based Roll Technologies will launch 100 e-scooters today and expand its fleet to 200 by next week.

In 2019, Roll was one of Kelowna’s participants in a previous pilot with limited e-scooter shares on city-owned waterfront property in the city center, with most of the rides being recreational. Kelowna is the first city in Canada to develop an e-scooter pilot, and the first city of Roll to launch its fleet of e-scooters.

Recent changes to the provincial Motor Vehicle Act and city government statute that allow e-scooters to ride on roads and bike lanes give this mode of transport the flexibility and scope to become a more viable transportation option.

“We got our scooters during the [first] Pilot. We had a booth in the visitor center to hear their feedback and offer helmets and safety training, ”said Arda Erturk, Roll COO, to Daily Hive Urbanized.

As a measure of equity, they will be launching their “Roll for Everyone” program which will offer low-income qualified participants a discounted rate of 50% through the BC Income Assistance Program. In addition, Roll offers individuals without a credit card or smartphone the option to purchase a Roll Card with cash at partner locations that will be announced at a later date. Students also get discounts through the Canadian company that offers the student rate card.

For broader user groups, the new Roll Pass offers frequent users, such as commuters, the option of driving at a low fixed price and packages with free daily, weekly and monthly e-scooter activation.

Both Roll and Lime users can get a free helmet at the Tourism Kelowna Visitor Center at 238 Queensway Avenue.

Lime has announced that it is working with colleges and universities to promote safe driving in downtown Kelowna. Their initial area of ​​use is based on researching where e-scooters and e-bikes could have the greatest positive impact and sustainability, in addition to safety considerations such as areas with bike lanes.

Lime points out that in recent years it has made significant investments in preventive sidewalk detection technologies, improved geofencing capabilities, and various parking solutions that are aligned with local jurisdiction guidelines.

“We are deeply grateful to the city of Kelowna for the opportunity to serve its residents and visitors, and we look forward to building a collaborative e-scooter program that is tailored to the needs of this beautiful city,” said Jen Freiman, General Manager , Lime Canada.

“We look forward to helping the community by providing safe and sustainable transportation for people to enjoy a really beautiful corner of British Columbia.”

A third operator, Zip, has also launched in Kelowna after receiving approval earlier this week.

Roll’s other operational cities are Calgary and Ottawa, while Limes presence in Canada and the Pacific Northwest includes Calgary, Edmonton, Portland, Spokane and Seattle.

Lime says it had great success in Edmonton and Calgary, where it deployed 2,000 and 1,300 e-scooters respectively last year.