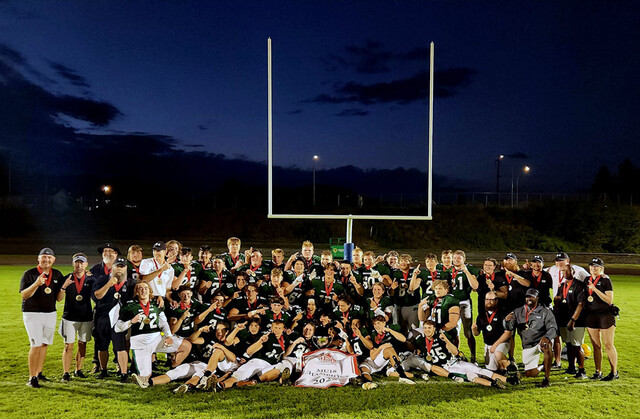 The Apple Bowl was the showcase of Canadian pre-university football over the weekend, Hosting the Football Canada Cup.

It was the return of the event for the best high school players from across the country. The last championship was held in 2019 in Kingston, Ontario.

Two-time defending champs Saskatchewan was in the final again, this time taking on third-seeded Alberta, which was in the gold medal contest for only the second time in the past decade.

Team BC, which includes several players from Kelowna, West Kelowna, Vernon and Kamloops, played Manitoba in the 5th place game.

The Football Canada Cup was established in 1995, and is the premier pre-university football tournament in Canada, featuring the top under-18 players.

Saskatchewan weathered a 30-minute delay when lightning hit the surrounding area in a 13-1 domination of Alberta in the championship game Sunday evening.

Quarterback Tayen Lloyd ran in from six yards out for the only major of the game late in the first quarter then the defence did the rest, bottling up Alberta most of the night.

Saskatchewan led 10-0 and had the ball with just under two minute left in the half when the teams were sent to their respective dressing rooms as a precaution due to lightning in the area.

The skies also opened up drenching the Apple Bowl field, but the rain stopped by time the teams were able to make their way back onto the field.

Carter Casey capped off that drive with his second field goal of the game just before the close of the half.

The only scoring in the second half came from a wide Alberta field goal.

Ontario led 14-13 early in the third, but Valerian Cyrenne hauled in a 13 yard touchdown strike on the ensuing drive to put Quebec up for good.

Jayden Rice booted two of his four field goals in the fourth quarter to seal the victory.

After a scoreless first quarter, B.C. came out firing in the second, scoring four times to take a 28-7 lead into the locker room.

Lucas Feaver tossed one touchdown pass and ran for another score while QB Owen Sieben hooked up with Renzel-Ron Arinaza on a 70 yard touchdown strike in the dying second of the half. B.C. scored twice in a 44 second span late in the half.

Cohen Carter caught a pair of touchdown passes for Nova Scotia while Sam Lecker-Evans returned an interception 86 yards for the other major.

Kelowna housing market is NOT crashing