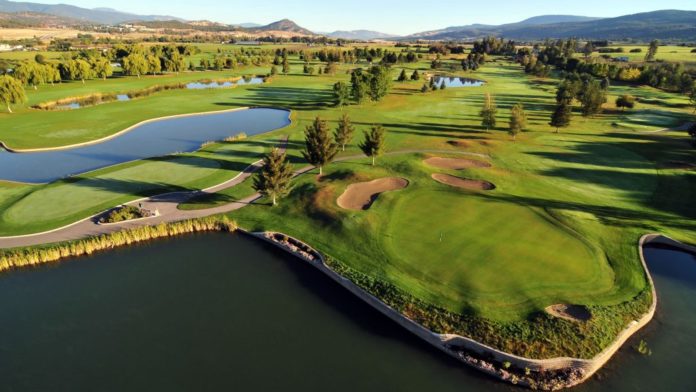 One issue you might hear about in the upcoming Kelowna municipal election concerns the future of one of its golf courses. It sounds simple but appears to have split council and a candidate for mayor staking at an opposite position to the current one.

And it comes down to a basic question: what kind of city do they want Kelowna to become?

The battle is over Kelowna Springs Golf Course, just north of the Highway 97 intersection with Old Vernon Road. It could continue in that capacity indefinitely.

But a couple of years ago as the city was drafting a new plan to guide its future growth, the owners approached the city and asked that the golf course be shown in the plan as either future commercial or industrial land.

he new plan was adopted this past winter with Kelowna Springs identified as a future industrial site.

On Monday, city staff defended their decision that it be industrial because the city — along with many other interior cities — are starved of industrial land. A 2018 City of Kelowna study estimated that 236 acres of industrial land would be needed by 2040.

“Since this study was completed, demand for industrial land has remained high with prices rising,” the staff report said. “Areas like the Airport Business Park will potentially see full build-out in the next two to three years and smaller sites along Highway 97 are being explored for industrial uses.”

That means the 106.5-acre Kelowna Springs site is ideally suited to help meet that demand.

But on Monday Coun. Luke Stack admitted the significance of this new designation slipped by him when the new plan was being made. In a prepared written speech to council this week, he asked council to reconsider its earlier decision, pointing out that a number of golf courses have been lost over the years.

The publicly owned Central Golf Course is where Walmart and Home Depot now sit, he noted.

Fairview in the Mission area is now covered by houses and a school. The city bought Shadow Ridge for future expansion of Kelowna Airport.

Four of the seven elected officials at the Monday meeting supported Stack’s motion to move the land back to “private recreational.” They argued that while industrial land is important, there are potentially other places for it. They said tourism is also an important economic consideration, as is recreation and protecting the environment by not tearing out all the trees and protecting water tables and natural springs.

Stack pointed to a recent citizens survey that showed residents perceived they have a declining quality of life in the city, including the loss of attractions like golf courses.

Basran was adamantly opposed, making a campaign-style defense of his position.

“One of the reasons I ran for council was because I had so many friends leave here because there weren’t job opportunities for them, not because they couldn’t find a place to golf,” he said. “It has already been stated a number of times that we need the industrial country. We’re all environmentally conscious. But, it’s OK to push industrial lands further out of our community while we know greenhouse alleys are the biggest contributor to climate change?”

He also disagreed with the suggestion that this feeds a decline in the quality of life.

“I believe people’s quality of life is diminishing because of things like inflation,” Basran said. “Now they have to make decisions on whether they buy gas or food for the week. I know a way to fix that is by providing good paying jobs, year-round.”

He added that the property owner pursued industrial and it wouldn’t be right to change it again.

Stack and Couns. Mohini Singh, Charlie Hodge and Maxine DeHart voted to reconsider while Basran and Couns. Loyal Wooldridge and Ryan Donn voted to leave it industrial. count Brad Sieben recused himself due to a conflict and Coun. Gail Given was away.

That sets up for an interesting vote when it returns to the council table.

From the outside looking in is declared mayoral candidate Tom Dyas, who leapt into the issue. He wants to “save” Kelowna Springs.

“Leadership is about making difficult choices and, while we must plan for the growth Kelowna is going through, we have to be extremely thoughtful so that we don’t erode the amenities and lifestyles that have led people to call Kelowna home in the first place ,” Dyas said in his news release. “While significant changes in a growing city have to be expected, it is important that we never lose sight of why people choose to live here in the first place.”

At its heart, the question is about what Kelowna is going to be — a city that prizes good jobs and a diverse economy, or one that cares more for lifestyle and the environment.

Stack’s motion to designate Kelowna Springs as “private recreational” is expected to return to council before the Oct. 15 election, City Clerk Stephen Fleming said in an email to iNFOnews.ca.

That means a final decision will likely be made before Dyas, if he becomes mayor, actually has to fight at the council table to save it.