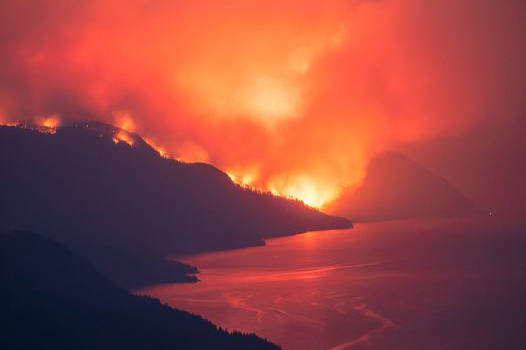 More than 450,000 hectares, and the entire community of Lytton, have burned.

I remember the first major wildfire season that I lived through. It was 2003, and Okanagan Mountain Park burned.

My family lived in Summerland at the time, out towards the Kettle Valley Railway on the west side of town, behind hills and well out of sight of the lake.

We still could see the light in the night from the fires, their glow that cast the smoke in the air into orange and red tones.

There was, and still is, a sense of awe I feel from those nights, from the scenes of that fire. Awe, and fear.

After 2003, after the fire was finally extinguished, it seemed like it was just a nightmare to wake up from. It wouldn’t happen again. I grew up without too much concern over the occasional smokey day, because they weren’t nearly as bad as what I remembered. It was a once in a lifetime kind of fire season, it couldn’t happen again.

Now we’re in 2021, entering August, and already close to half a million.

That’s only here in B.C. Last year may have been quieter here, but Australia burned. This year, Siberia is on fire.

Fire seasons are getting worse, and climate change is a major factor.

Is it the only reason? No. Things like historical fire practices likely contribute as well, but climate change, and the consistently high temperatures we are facing, can’t be waved away.

In the South Okanagan, over the B.C. Day long weekend, temperatures were expected to hit 38 C, as the Nk’Mip Creek and Thomas Creek wildfires burn out of control.

In Penticton, temperature records were recently broken. Lytton set Canada’s own record before it burned to the ground.

This isn’t a new normal, but it is a new baseline.

Ten, 15, 20 years ago, we were already getting past the time that we needed to start taking climate change seriously.

These fires are not going to get any better unless the world starts to change.

Even then, it may be too late, as the greenhouse gasses emitted from the wildfires eclipse all other sources.

Estimates on how much greenhouse gasses are released per hectare vary, from the equivalent of 125 tonnes of carbon dioxide to 150, depending on who you ask.

For the 450,000 hectares burned so far, and going by the smaller estimate, that’s roughly 56 million tons of CO2. In 2018, the last year available for the provincial statistics on our greenhouse gas inventory, there were 67 million tons produced by people.

The thing is, there can still be change.

In 2007, the province promised to cut emissions by 33 per cent by 2020. The province’s own greenhouse gas inventory shows that they instead increased by seven per cent from 2018.

If the province had stuck to that promise, would the years of 2017 and 2018 not been so bad? It’s impossible to tell.

The climate shouldn’t be up for debate. There are no two sides to climate change.

There have been government promises before about change. They need to be honoured.

If there is one thing I have learned, it’s that if yesterday was the best day to make change, then the next best day is today.

Brennan Phillips is a journalist with Black Press Media.

Kelowna meals financial institution is getting a brand new house