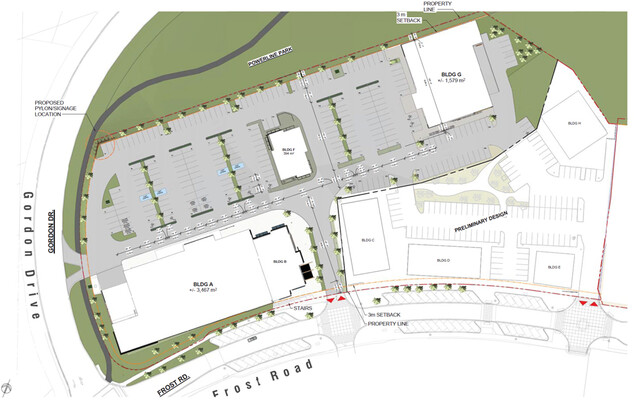 Developers of The Ponds neighbourhood have brought forward plans for what will be the first of two phases of commercial build out.

The proposal brought forward this week shows plans for a four building commercial development at 988 Frost Road at the intersection with Gordon Drive.

A second phase on the adjacent property is expected to be brought forward at a later date.

The commercial development would be directly across Frost Road from a 300 unit rental development given third reading by council this week.

The residential and commercial projects are both part of an overall village centre within the larger Ponds development.

The commercial proposal now before the planning department, would be sited on approximately seven acres of land.

A development rational states the project would be designed to provide “basic day-to-day services for the area.”

While specific details have not yet been released, planner Tyler Caswell says he believes there will be space for four tenants.

The largest building appears to be large enough to potentially house a grocery store.

The rational also mentions a potential restaurant on site.

Caswell also indicates the property is zoned for a liquor store although there is no indication one will be brought on site.

The developer also plans to utilize “stylized wood trestle elements,” a nod to the train trestles within the outlying area.