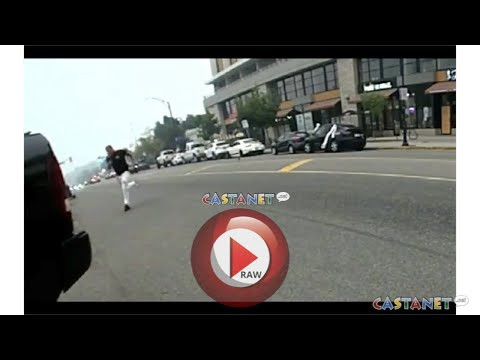 As police continue their investigation into Saturday’s brazen gangland shooting on Kelowna’s Pandosy Street, new surveillance footage is shedding light on the incident.

Two men were wounded after gunfire rang out just before 7 p.m. on Pandosy as nearby restaurants were busy with the Saturday night dinner rush.

The shooting was the fourth assassination attempt targeting West Kelowna man Kyle Gianis since 2017, prompting RCMP to name him as one of the victims and label him as a danger to the public.

Gianis has since been released from hospital. The other victim, a 25-year-old Surrey man, was brought to hospital with “life-threatening” injuries.

Castanet News has obtained video captured by a vehicle parked nearby the scene of the shooting. It shows Gianis and another man entering a car parked on the street, when a hooded figure stands up from a nearby bench and opens fire.

Both wounded men stumble out of the vehicle and run across the street while the shooter continues to fire. The hitman then throws something across the road, towards the fleeing men, before jogging north on Pandosy. The wounded men then took cover behind cars on the other side of the road, with one of them making it to the doorway of a restaurant, prior to police arriving.

RCMP said Sunday they discovered what was believed to be an improvised explosive device at the scene of the shooting and called in the provincial bomb squad, resulting in an extended closure of the area. They have not yet confirmed if the device they found was indeed an explosive.

It’s also not known if the item the shooter is seen throwing in the video was the suspected bomb that officers found. Castanet has requested an update from police.

“Incidents like this put the lives of innocent people and our first responders at risk and are not acceptable,” Basran said.

Prior to the Pandosy shooting, Gianis was most recently hit with bullets in March in the parking lot of Global Fitness off Harvey Avenue. The Vancouver Sun reported that he mocked his failed assassins on social media after the attempt.

His home in West Kelowna was also raided in March by the Combined Special Forces Enforcement Unit — the province’s police gang unit.

In 2017, he was the target of a shooting in Langley outside a restaurant that ended up killing his friend Tyler Pastuck. David Tull was sentenced to nearly 12 years in jail for conspiracy to murder Gianis in the 2017 shooting.

Then in 2018, Surrey nurse Paul Bennett was killed when an assassin searching for Gianis went to the wrong home, reported the Vancouver Sun at the time.

Gianis was sentenced to 13 years in prison in Washington State in 2008 for smuggling methamphetamine precursors into the U.S. He was transferred to Canada and released on parole in 2013.

In 2007, the CBC reported that Gianis was the occupant of a home that was shot at two nights in a row.