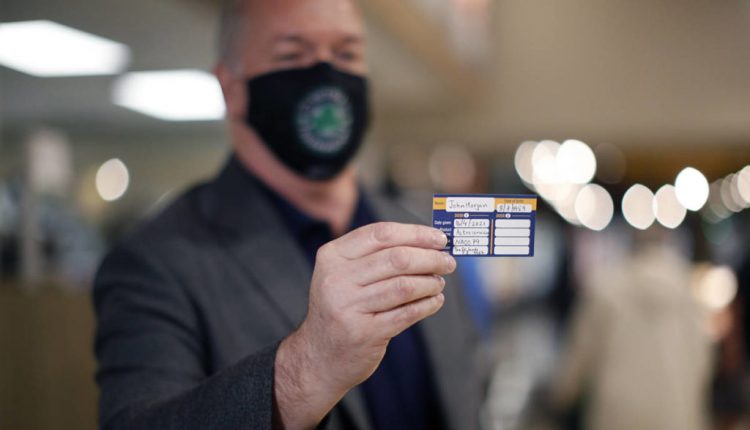 The Canadian business community appears to be largely supportive of the Quebec government’s move to impose the country’s first vaccine passport system.

The Canadian Chamber of Commerce says vaccine passports or digital vaccination certificates would help to prevent future waves of the pandemic from forcing a resurgence of financially disastrous lockdowns by enabling those with low risk to participate in events, move freely and go about their daily lives.

“Absent that, what you have is people being held hostage,” chamber president Perrin Beatty said in an interview before the province announced the new system to curb the spread of COVID-19.

He noted that 80 per cent of Canadians over the age of 12 have already demonstrated their willingness to get vaccinated, but that’s too low to achieve herd immunity.

“The private sector, like Canadians as a whole, is diverse — but one thing in which the private sector is very much united is that we can’t afford to go into more across-the-board lockdowns.”

Quebec announced last week that it would require Quebecers as of September to show proof of vaccination in order to access non-essential services in parts of the province where COVID-19 transmission is high.

Premier François Legault said the province appears to be entering a fourth wave of rising infections and that he doesn’t plan to return to lockdowns.

Increasing the rate of vaccination would be ideal, Beatty said, but certificates could also help to protect people’s health without inflicting major social and economic damage on the country from the Delta variant and other potential variants.

Beatty said the chamber’s goal is to prevent mass lockdowns by controlling the risks posed by the Delta and other potential variants.

He said digital certificates would also be critical for international travel to provide proof of status for other countries that want to ensure visitors meet their vaccination requirements. Paper documents could easily be forged so machine-readable documents are needed that meet globally accepted standard, Beatty noted.

“I’m fully vaccinated. But if I were attending a concert, I would feel an awful lot more comfortable knowing the people I was jammed in with have themselves been vaccinated.”

The Toronto Region Board of Trade last month called on the Ontario government to introduce a vaccine passport system for non-essential business activity.

Digital certification would also help to assure employees and customers that it’s safe to return to work or visit places of business said Beatty, with rapid testing as a supplement.

He said vaccine passports aren’t dissimilar to the Nexus Pass, a voluntary system that allows Canadian and American travellers to cross the border more rapidly.

A recent Leger survey found that 58 per cent of Canadians and 37 per cent of Americans support imposing a vaccine passport for all essential and non-essential activities.

And nearly 78 per cent of business members surveyed by the Montreal Board of Trade support the use of a vaccine passport, says the group’s president.

“It’s a clear signal from the private sector that they see the vaccine passport as a tool that should be used. And of course, in their view, it’s because you do not want to have to close down the economy again,” said board president Michel Leblanc.

The group has been studying the issue for months but Leblanc said the benefits of the passports crystallized during the Stanley Cup finals, when Montreal Canadiens fans were limited in number during home games while the Tampa Bay Lightning arena was full.

The passports could help to ensure that people attending sporting events, movie theatres, bars or places that attract large crowds are fully vaccinated, he said.

The board of trade was among those pressing the Quebec government to put a passport system in place.

France is adopting a vaccine-passport system and New York City plans to require people to show proof of COVID-19 vaccination before they can dine indoors at restaurants, see shows or go to gyms. The system will be phased in over several weeks in August and September.

Prime Minister Justin Trudeau said he supports Quebec’s move to introduce a passport system, though he has said each province must decide for itself.

The federal government is reportedly working on secure vaccination certification for international travellers.

While Canada’s large business lobbies are pushing for change, many industry groups are at the early stages of studying the issue.

“We’re very much in the position of gathering intelligence at this point,” said Denise Allen, head of the Food Processors of Canada.

“We’re careful to observe that the rise in Delta variants clearly necessitates us to stay vigilant on promoting vaccine acceptance.”

Allen added that there are deep concerns about how civil liberties could be curtailed by passport vaccine requirements and how the passport system would work, whether it would be accepted throughout the world and how it would be managed.

The use of vaccine passports might be helpful in some circumstances but not in the retail setting which is far less discretionary and scheduled and attracts families with children under the age of 12 who cannot currently be vaccinated, says the Retail Council of Canada.

The group’s concern about vaccine passports is very similar to masking rules.

E-scooters roll out once more in Kelowna