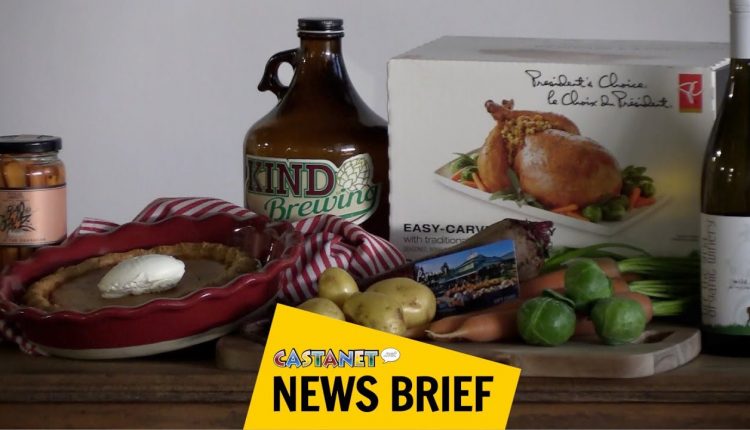 Some celebrity chefs stopped by the Central Okanagan Food Bank Monday for a photo shoot and to show off their creations for the 3rd annual Bake the World a Better Place pie sale and auction.

It was first launched during the pandemic and has now become one of the main fundraisers. The goal is to raise $35,000.

The chefs will be baking 21 pies for the event that takes place just in time for Thanksgiving.
20 will be for regular sale and one will be auctioned to the highest bidder.

“Our pie is a vegetarian pie. It is a mushroom tourtiere. It’s a pie that myself and our executive-chef Luc Bissonette created. It’s got sort of that alpine, mountain theme to it,” describes Shelly Robinson, the director of food and beverage for Big White Ski Resort.

Also on hand was Scott Hackman from New Country 100.7. He brought a sample of his strawberry rhubarb homestyle pie that his girlfriend baked using his grandmother’s recipe.

“For me, the greatest way to be a part of the community is to give back to the community. And certainly, with all the incredible people here at the Central Okanagan Food Bank, and the great need for the services that they provide, it was an easy thing to absolutely say yes to,” said Hackman.

This year is the busiest it’s ever been at the two food bank locations in Kelowna and West Kelowna.

“Things are really, really tough for people. Inflation is having a major impact and we have pulled from our reserves,” explains food bank chief executive officer Trevor Moss.

“We’re just encouraging people, especially if they can help out, if they can donate. Especially this time of year with people’s backyards and all their produce. If they want to give some of that, like zucchinis or carrots. Anything like that would be greatly appreciated because right now we are low on produce.”

The food bank is also gearing up for the launch next week of a back-to-school backpack program. It’s a partnership with seven schools in the Central Okanagan.

“Coming up into the fall, we’re going to be asking for backpacks from the community. We’re going to actually fill that with food, and then when the clients are coming into the food bank the kids and youth will be able to get an amazing, nice backpack. And then from that they’ll be able to access the food on a weekly basis to actually take home or to eat at lunch time,” said Moss.

The Bake the World a Better Place pie sale begins September 21 and the auction runs from October 1 to October 4. More information will be shared at the beginning of September.