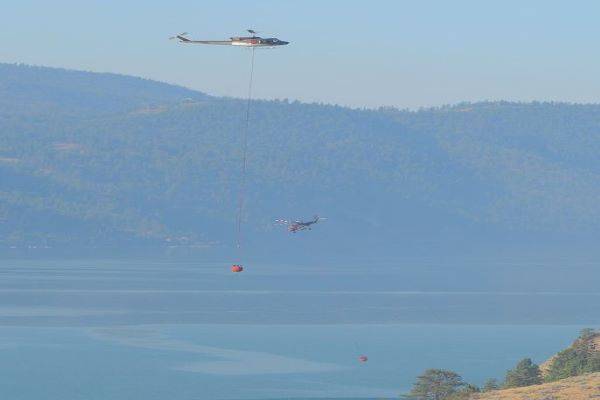 B.C. Wildfire Service helicopters battling the Becker Lake Fire near Vernon have been having problems with watercraft interfering with their ability to draw water from the north end of Kalalmalka Lake. (Wayne Emde photo)

The District of Coldstream closed the Kinloch and Kalavista boat launches Monday, July 12 due to ongoing wildfires in the area, particularly the Becker Lake blaze. But the district is reopening the launches as of Tuesday, July 13.

“The district thanks residents and visitors for their understanding during these critical times as we support emergency personnel and first responders in the region,” a media release said.

“Please be advised that the boat launches may be closed in the future should the need again rise to support firefighting efforts in the region.”

The announcement comes after air support had to be grounded due to drones flying in the area over the weekend, as well as boaters preventing tankers from accessing Kalamalka Lake to reload.