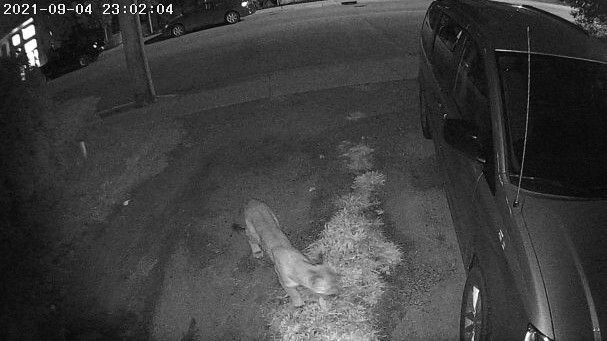 Cougar noticed in a number of Kelowna neighbourhoods – Kelowna Information

The BC Conservation Officer Service says the cougar was sighted several times in the areas of Lakeshore Rd., Dickson Ave, Abbott Street and Richter Street over the past few nights.

The predators can travel long distances and that can sometimes bring them into populated areas, like cities. Usually, those appearances are brief, with the animal moving along quickly.

This particular big cat was exhibiting normal, natural behaviour and has been assessed to be a low public safety risk.

The BCCOS says cougars are normally nocturnal and typically prey on their available food source within the areas they live. This diet can include primarily deer which also live within the city of Kelowna.

The British Columbia Ministry of Environment estimates the cougar population within the province to be approximately 7,000 animals.

The BCCOS says the number of cougar sightings in Kelowna is similar to past years.

It also notes attacks on humans are extremely rare.

However, if you do encounter a cougar you should:

STOP : Never approach or feed a cougar at any time for any reason.

STAY CALM: Detour around any cougar, give it space and do not run. Maintain eye contact, never turn your back, speak in a confident voice and slowly back out of the area. Sudden movements may provoke an attack.

KEEP CHILDREN CLOSE: Always keep children nearby and in sight. Pick up all small children immediately.

BE PREPARED: Utilize natural barriers and keep trees or other large obstacles between you and the cougar. Carry Bear Spray, Walking Stick and Noisemakers to use for protection. Make noise to avoid surprise encounters.

Dogs may provoke a cougar attack, so pets should be kept on leash or left at home.

The Conservation Officer Service also reminds people not to feed wildlife of any kind because it can attract bigger predators.

Kelowna resident Kim Cherrington says she had a rather large visitor in her backyard Saturday night.

Cherrington says her motion camera captured video of a cougar walking around her yard in the Landmark area, near Burtch Road and Dickson Avenue just after 11 p.m.

“Conservation and RCMP are searching yards for it,” she said.

Castanet has reached out to both the RCMP and the Conservation Officer Service for more details.

Just two weeks ago, Conservation Officers were forced to tranquilize a cougar after a family found it in their backyard tree.