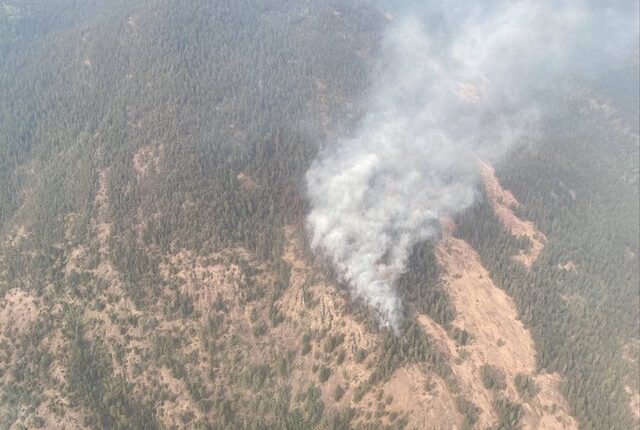 A steady stream of air tankers and helicopters, dropping water and retardant, appears to have made a significant dent in the Mount Miller Wildfire above Trepanier Road.

The fire has been reduced to a smouldering ground fire.

Ground crews are in the area and working to get to the fire on foot.

Helicopters and air tankers have been hitting the fire hard from the sky.

The fire is burning on steep slopes, high above Trepanier Road and Highway 97C.

Growth has been minor over the past hour.

The BC Wildfire Service has been called in to fight a new wildfire burning in the Trepanier area.

Known as the Mount Miller Wildfire, this latest blaze is sending large plumes of white smoke high above the ridge to the northeast of Trepanier.

Charlene Mortensen with the BC Wildfire Service in Kamloops says the fire broke out about an hour ago. It is estimated at two hectares in size.

“It’s currently burning four kilometres west of West Kelowna and about two-and-a-half kilometres north of the Okanagan Connector,” she says.

Six provincial firefighters, two helicopters and an air tanker are working the fire.