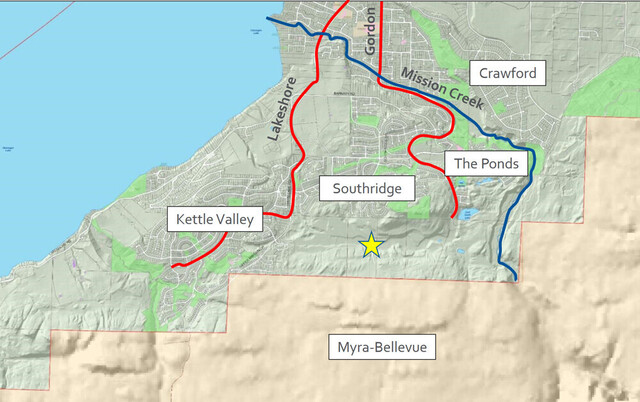 The owners of the property known as Thomson Flats in Kelowna’s Upper Mission have filed suit against the city and planner Dean Strachan after an application to subdivide two lots was denied.

The subdivision application was made on May 28, three months after city council denied Canadian Horizons proposal to construct 250 to 300 homes on the property and more on three adjacent lots.

As part of the original denial, council also instructed staff to “exclude the subject properties from the permanent growth boundary in the draft 2040 Official Community Plan.”

Canadian Horizons subsequently applied to subdivide the 65 hectare property into 14 lots on May 28.

According to court documents filed recently in BC Supreme Court in Kelowna, Canadian Horizons says the property in question is zoned agricultural, but is not part of the ALR.

They say single-family homes with a minimum lot size of four hectares is a permitted use.

“(We) met all criteria for subdivision, such that there was no valid basis for respondents to refuse to grant subdivision,” they stated in court documents.

They state the approving officer (Strachan) may refuse applications, but “must provide reasons.”

The claim alleges the application was denied contrary to the public interest.

They say Strachan’s reasons for refusing the application “were made in bad faith, were specious (superficially plausible, but actually wrong), and were made on a totally inadequate factual basis.”

They further claim the city acted in bad faith in denying the application, stating the denial was made to “put a hold on proposed subdivision and otherwise lawful development of property,” due to its possible inclusion within the city’s permanent growth boundary.

Canadian Horizons also say they were told “several policies” did not support the application and that, “upper management was unimpressed” when their plans were first brought up in April.

“The approving officer, Mr. Strachan, actually wrote to petitioners on May 4, 2021 advising that we would not be supportive of the application, stating he was providing a clear non-support response, prejudging the application before it had been received, and indicating he was acting in concert with Kelowna rather than exercising his own discretion” documents stated.

“What is obvious is that Mr. Strachan was told to deny petitioners’ subdivision application, probably before it was even formally submitted and, did as told. An unlawful act.”

Canadian Horizons is asking the court to set aside the decision denying the subdivision application, and compel the city and Strachan to grant the application.

The city has yet to respond to the lawsuit.

None of the allegations made have been tested in a court of law.