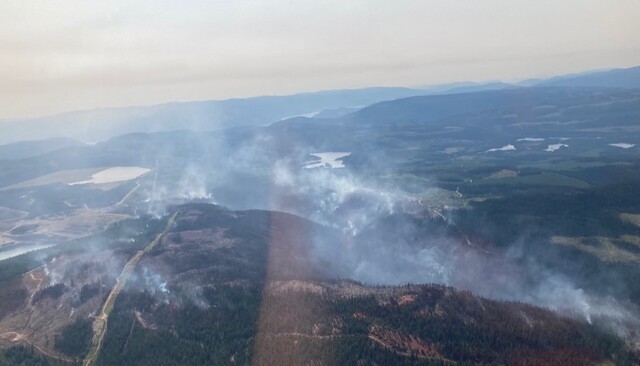 Winds were blowing in the right direction for BC Wildfire Service crews Wednesday, on the Brenda Creek fire.

It allowed them to reinforce sections of a guard line on the northwest corner of the fire, and to burn off some fuel.

The winds did cause some growth on the east and south sides of the fire but did not impact the BC Hydro transmission line.

Forecast winds could have unpredictable impacts on the Brenda Creek wildfire, leading officials to warn about the potential impact it could have on the sole power line providing electricity to tens of thousands of local homes.

The wildfire sparked last Wednesday grew to about 450 hectares over the weekend, and despite it remaining that size over the past couple days, it’s still classified as out of control. It’s burning about 40 kilometres west of West Kelowna.

With strong winds in the forecast, Central Okanagan Emergency Operations is warning residents of West Kelowna, Westbank First Nation and Peachland to prepare for a possible power disruption.

“With the BC Wildfire Service strong wind advisory and the unpredictable impact on the Brenda Creek wildfire, the Central Okanagan Emergency Operations Centre encourages residents and businesses that could be affected by any extended power outage to make emergency preparations,” the EOC said in Wednesday’s update.

“Even with the efforts of the BC Wildfire Service and structural firefighters from Kelowna, West Kelowna, Peachland and North Westside to defend and protect the main BC Hydro line and transmission corridor, the fire remains out of control at an estimated size of 450 hectares.”

BC Hydro’s transmission line is the only source of power for more than 60,000 customers. While the fire threatened the line last week, the line has remained safe so far.

The EOC says fire crews continue to extinguish hot spots along the BC Hydro corridor.

“A mass water delivery system is now in place to protect the section of the transmission line within the fire perimeter,” the BC Wildfire Service says.

“This delivery system consists of a four-inch hose line that supplies a series of larger sprinklers. A specialized high-volume pump supplies water to the line, which can be turned on quickly if the threat to the transmission line increases due to increased fire activity.”

There remains an evacuation order for 43 properties near Headwaters Lakes, while a large area restriction near the fire was put in place in the area on Saturday. The Okanagan Connector remains open at this time.

On Wednesday, there are 39 BC Wildfire Service firefighters working on the blaze, along with three helicopters and 12 pieces of heavy equipment.

The cause of the fire remains under investigation.