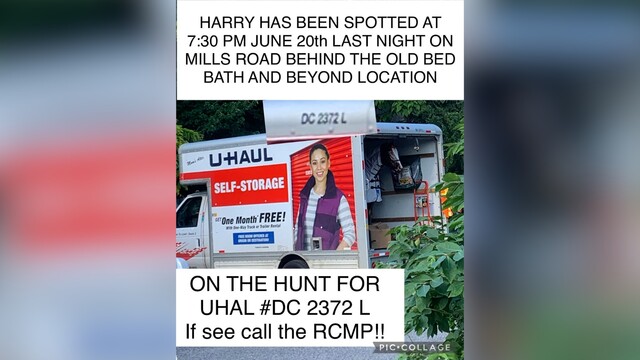 The UHaul with Harry inside was spotted Monday night on Mills Road.

Harry has been spotted.

Diamond H Tack posted on their Facebook page a picture of the UHaul, with the stolen fibreglass horse inside.

It was seen Monday night around 5:30 p.m. on Mills Road, behind the Bed Bath and Beyond. The truck then left the area around 7 p.m.

The photo was clear enough to determine the truck number is DC 2372 L.

Anyone who sees the UHaul or Harry is asked to call the RCMP.

Diamond H Tack co-owner Heather Robson is asking anyone who might have been driving by at the time Harry was stolen to check their dashcam footage and let the police know if they captured anything that could help in the investigation.

Robson said he’s been an icon in our community for the last 26 years, not just outside their store but attending 4-H events and parades.

“One of my family friends had him and brought him to us in a horse trailer in 1995. He’s a Prewitt fibreglass original horse from the ‘70s. So, he’s not new, but he’s a sturdy little guy,” she adds that he was wearing a horse blanket and halter when he was stolen.

She said staff at a neighbouring business saw the UHaul come by but didn’t realize what was happening.

The employee identified the suspects as two women. One was skinnier, one was more heavy-set.

Robson is pleading with people who work in the area to check their dash cameras. She’s hoping the footage could help identify the license plate number on the truck.

Harry the horse has been stolen in a brazen, daylight theft.

Owners are hoping the public can help get him back.

Harry, a 26-year-old light brown appaloosa with a white bum and spots on it, has been a fixture in front of Diamond H Tack on Kirschner Road for nearly three decades.

Until yesterday when thieves driving a U-Haul cube van made off with the fiberglass mascot shortly before closing time at about 4:50 p.m. Monday.

Surveillance video in the area shows a U-Haul pulling up in front of the business, loading the horse inside, and driving off.

One of the thieves was dressed in a red shirt and black shorts while the driver appeared to be wearing a black shirt and light pants or shorts.

They made their getaway down a back alley between BC Sportswear and Princess Auto.

Harry is a life-size horse, standing about five-feet high on four wheels and mounted on a brown steel frame,

He was wearing a white blanket with a small blue check pattern (Kool Koat detachable neck) and a navy blue rope halter.

Demographics present Kelowna is getting youthful

Caesar Week is coming to Kelowna in July