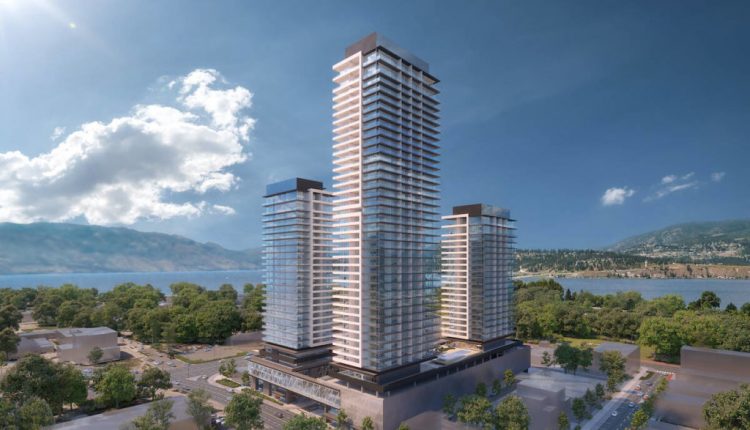 Shovels are officially in the ground for what will be Kelowna’s largest and tallest largest tower.

A groundbreaking ceremony was held April 12 at the Water Street by the Park development in the heart of downtown, next to City Park. At 24, 28, and 42 storeys, the three-tower, 650-unit development by Orchard Park Properties (OPP) will redefine the city’ skyline with the tallest tower in BC’s interior (442 ft./132.7 m) and expansive views of Okanagan Lake, as well as mountain and valley views. The build will feature the ‘Eli’ tower, named after OPP co-founder Anthony Beyrouti’s son.

“The demand for new homes in Kelowna is just incredible and it’s coming from all directions,” Beyrouti told Capital News when the building application was submitted in Jan. 2022. “Our buyers include Kelowna residents who already know and love this city, as well as people who have vacationed here before or have heard all about Kelowna’s healthier lifestyle, recreation opportunities and its high ranking on national and worldwide livable city rankings.”

Amenities are set to include a lounge, gym, movie theatre, a putting green, art room and even a dog wash station. Approval for the build was given by council in Jan 2021, passing 7-2, with Councilors Gail Given and Charlie Hodge opposed at that time.

“I want to congratulate Orchard Park Properties for their vision and persistence and wish them all the best as construction begins,” said Deputy Mayor Gail Given. “Water Street by the Park is an impressive example of their commitment to this city and this community and I’m sure that, once completed, this development and the families that will call it home, will make an important contribution to Kelowna’s stature as one of Canada’s most livable cities.”

Beyrouti thanked council and city staff for supporting the project.

“For us, building Kelowna’s largest residential development represents an opportunity to make a lasting and meaningful contribution to this city and this neighborhood,” he said. “Kelowna is such an amazing city. We feel privileged to be here and build homes that will provide residents with a lifetime of opportunities to enjoy and appreciate Kelowna’s natural beauty, healthy lifestyle and its growing entertainment, dining, shopping and recreation offerings.”

370 homes have so far been sold between towers one and two.