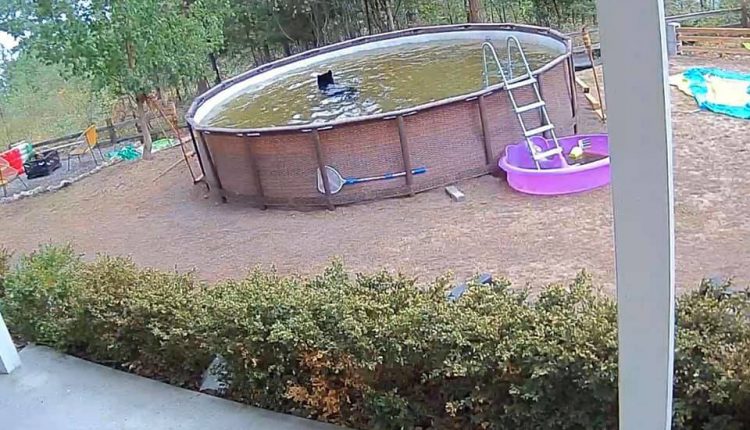 A bear went for a dip in a Westshore Estates pool while the occupants were evacuated Aug. 31. (Joshua Tanzola photo)

A bear went for a dip in a Westshore Estates pool while the occupants were evacuated Aug. 31. (Joshua Tanzola photo)

While residents are away, the bears will play.

An increasing number of bear sightings have been caught on home surveillance cameras by those evacuated due to the White Rock Lake wildfire.

Joshua Tanzola noticed some activity on his Westshore Estate camera Tuesday, Aug. 31. He turned it on to see a bear wandering around his backyard.

And then continued to watch as the bear climbed into his above-ground pool and splashed around.

He didn’t mind, as the green, untreated water had been sitting stagnant for 31 days and would need to be cleaned anyway.

“Birdbath and wildlife pool until we return,” he said, reminding his neighbours to be careful when they do get to go home.

More and more bear sightings are being reported in this and other areas, and could continue to increase.

WildSafeBC says September is historically a month where human-bear conflicts are at their highest. But the situation is compounded this year.

“Due to the extreme drought and heat in many areas of the province this year, many communities are experiencing an increase of conflicts,” WildSafeBC reports.

Bears are looking to consume more than 20,000 calories during this time of year by grazing on sugar-rich berries.

“With the high temperatures this summer, many of these berries ripened early and some have already shriveled up on their stems,” WildSafeBC said. “Bears that have spent the season dodging forest fires and smoke are now being drawn into our communities by the smell of fruit that has been artificially irrigated along with other sources of food.”

Increased bear sightings are common in Kalamalka Lake Provincial Park, where a sow and two cubs have been seen feeding on carcasses, swimming at Jade/Juniper Bay and roaming the woods.

“It’s more than usual and earlier than usual,” said Peter Horsley, with the Friends of Kalamalka Lake Park.

“Right now they are eating machines. If you live near a forest interface area please pay attention and remove any potential attractants. We don’t want any of them destroyed because they become habituated to humans.”

That is also the advice of WildSafeBC, which says that while it’s natural to feel concern for bears, we are doing them a disservice by allowing them to find food on our properties.

“Eventually, a bear that avoided human activity will now become accustomed to it, and then linger in neighbourhoods to feed on human sources of food. When the fruit wanes, the bear may then move to other easy sources of calories such as unsecured garbage, birdseed and greasy barbeques. This results in a dangerous situation for people and bears. A food-motivated bear may break into structures and become defensive of its food source. These bears often have to be destroyed by the Conservation Officer Service when their behaviour is deemed a risk to the public.”

READ MORE: Safe to swim at Kal Beach in Coldstream