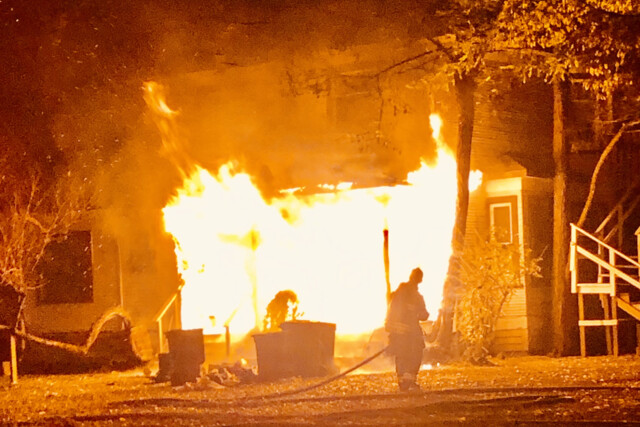 A fire in the 800 block of Harvey Avenue on Saturday evening is believed to be suspicious in nature and is now under investigation.

Fire crews were called before 6 p.m. to the fire, according to Kelowna Fire Department.

“Witnesses stated that they saw some people in the front throw something on the deck. So it is a suspicious fire.”

The investigation has been handed over to the RCMP and fire crews remain on scene to mop up.

Light added that while there were residents inside the building, they were evacuating as crews arrived so there were no injuries.

The fire was quickly knocked down and an extensive overhaul was completed.

“Everybody got out okay,” he said.

The cause of the fire is still under investigation.

Some occupants of the building are currently being looked after by Emergency Support Services.

The Fire Department had three engines, one rescue vehicle, one command vehicle along with 16 personnel on scene.

A multitude of fire trucks have been seen responding to a house fire on Highway 97 between Gordon Drive and Ethel Street in Kelowna on Saturday evening.

Joanne Firth drove by the home just before 6 p.m. to see it fully engulfed in flames.

“The house is completely on fire, completely in flames. When we passed by all the fire trucks were just arriving. One was there, then four more arrived. There’s people out there with hoses trying to put it out,” she shared.

“It was unbelievable how badly on fire it is. The whole house is going down.”

Another witness to the fire said she passed by twice and saw eight fire trucks show up to tackle the flames. The house fire has since reportedly been put out.

Traffic is still moving through the area single lane.

Castanet has reached out to the Kelowna Fire Department for more information.