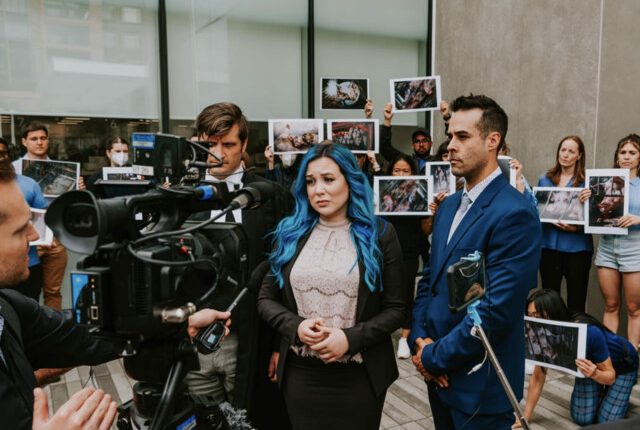 Two Kelowna-based animal rights activists have been jailed for 30 days for an occupation of a Fraser Valley hog farm.

Amy Soranno and Nick Schafer were sentenced Wednesday to 30 days in prison and 12 months of probation. The couple were convicted at trial of break-and-enter and mischief in relation to a protest at the Excelsior Hog Farm in April 2019 that saw around 65 activists enter the farm while live streaming online.

During Wednesday’s sentencing, CTV News reports an Abbotsford judge called that protest a “carefully planned and orchestrated mass invasion” and that the pair “incited and encouraged many others to break the law.”

“I’m not surprised. It’s kind of what we expected,” Schafer told CTV. “I’m upset. I don’t feel justice has been served. We try hard to fight for the greater good.”

The activists claim they occupied Excelsior Hog Farms in an attempt to expose the poor treatment of livestock. Prior to the occupation, People for the Ethical Treatment of Animals (PETA) released a hidden-camera video, allegedly filmed at the farm, showing sickly pigs in cramped conditions.

The SPCA, however, was unable to verify the video and did not proceed with charges against the farm.

Soranno is known locally in Kelowna leading protests against Ribfest and factory farms. Prior to the trial, she told Castanet News she hopes their case encourages people to stop supporting factory farming and adopt a plant-based lifestyle.

“I accept and take responsibility for my actions, while also recognizing that without actions like ours the animals remain hidden and unprotected,” she said on Facebook prior to sentencing.

Soranno is also facing prosecution in Ontario after being pre-emptively arrested last year in advance of an action at a turkey farm.

The defendants referred to the case as the “Excelsior 4,” as there were originally four people charged in relation to the protest. The Crown dropped charges against Geoff Regier prior to the trial while Roy Sasano was acquitted at trial.

Soranno and Schafer will be serving their sentence intermittently and will not be in custody until Oct. 21. They have announced they will be seeking an appeal.

with files from CTV Vancouver

Sentencing is over. Amy and Nick are not in custody until October 21. They will be able to make a statement shortly on the Meat The Victims IG stream https://t.co/a2nEMnfsxs