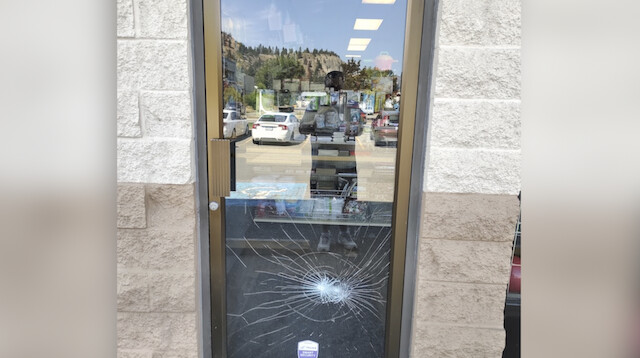 While a pane of security glass managed to prevent another burglary at a family-run business in Kelowna, its owners are exasperated with a recent increase in property crime.

Sweetnam’s Nik Naks owner Daniel Sweetnam said the security glass installed at the Enterprise Way collectables shop after a break-in in June managed to keep out another set of burglars, but its replacement is not cheap.

“Yesterday morning, [my son] came to open the store and the same door that was smashed last time was again [smashed] – it looked like someone took a rock to it and tried to smash it in the same general area. They tried, they tried really hard,” explained Sweetnam.

He says his family and staff have noticed a significant rise in aggression from thieves this summer, with one incident resulting in a physical altercation.

“A few days ago we had some shoplifters come in. The male was using a very strong attitude towards my other son. When he tried to stop them, he just got angry and stormed out… he grabbed a bunch of cards. We’ve had a lot of aggression the last six seven months, to the point where someone charged at my son and he literally had to push back,” said Sweetnam.

After run-ins with shoplifters, Sweetnam has contacted the police each and every time, but he says he’s growing tired of the repetition.

“We’ve brought every incident up with the police, let them know right away. We’ve beefed up security around the building but they’re camping out around the corners at the garbage bins… There are a lot of homeless people that are polite and just trying to get out of the heat, but there’s a handful of people that I swear are just on a circuit to cause trouble.”

According to Sweetnam, other stores on his block have been hit on multiple occasions. He tells Castanet some business owners have stopped reporting similar incidents to the police because the same problems just keep happening.

“I’m angry, I’m frustrated, I’m just exhausted like my whole family is. I’ve been in this business for 20 years and I’m looking around at other businesses around the neighbourhood and there’s another one down the road that has their door boarded up because there are so many that are getting smashed right now.”

“You start to get afraid and nervous. It’s costing us money that we don’t have. I get mental health, but I’m at the point where something needs to be done,” urged Sweetnam.

As the Sweetnam makes more repairs, the store owner is pushing for residents to vote in the upcoming local election. Sweetnam’s will be installing security cameras and barred doors to try and mitigate the problem further.