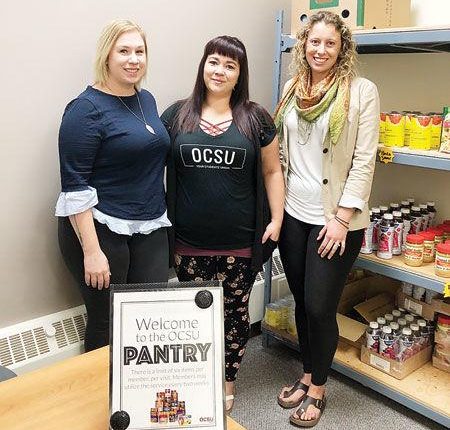 Nearly 10 years in the making, the Pantry at Okanagan College’s Kelowna campus has finally opened its doors to hungry students struggling to put food on the table.

Non-perishable food items and hygiene products lined the shelves as donations began to pour in earlier this month, and while the room, for now, remains small, the hard work and dedication from the Student Union Society and staff inside remains mighty.

“This space is our first step in growing awareness around mental health and wellness,” said Brianne Berchowitz, executive director of the OCSU.

Having been a part of the conversation and formal lobbying for the Pantry since 2009, Berchowitz is excited to finally see it become a reality.

For first-year business student Natasha Mangel, recently elected to the campus council, the Pantry is a personal cause.

“I think the Pantry is fantastic,” she said. “Being a student is difficult.”

A lack of available space and money stopped the society from opening the Pantry sooner, but with Thursday marking its third day of operation, students are already using its services. And, with the first day of classes just around the corner, Berchowitz is certain the number of students needing to use the Pantry will shoot up.

“There are 5,000 students on campus, many of whom can’t access community services for a variety of reasons. The number (of those in need) is higher than it ought to be,” she said.

With the cost of tuition, textbooks and living away from home, students facing financial difficulties are allowed six items from the Pantry every two weeks. But, Berchowitz says, that number could increase should student need prove to be higher than expected.

“There’s students that, in the first couple of weeks, don’t have any finances left,” explained Philip Ashman, the regional dean of Okanagan College Kelowna. “(With the Pantry), there’s now no barrier preventing them from having access to food.”

Ashman said students using the Pantry can be assured that access is discreet and they aren’t being judged.

“When you walk into the Pantry, everyone has a big smile on their face and are so welcoming,” he said. “We really want people to feel comfortable here.”

As the campus gears up for the start of a new school year, the Pantry’s hours aren’t yet set to a specific schedule. Okanagan College organizer Courtney Kindlein wants to encourage students to keep an eye out for sandwich boards around campus, and to use information readily available on the society’s app and social media outlets. But, most importantly, Kindlein wants students to know that help is always available even when the Pantry is closed.

“If it’s an emergency and you need access to food, we will always let you in,” she said.

Accessible food by donation is a service provided by Okanagan College in Penticton, Salmon Arm, Vernon and now Kelowna, as well as at UBC Okanagan. For schools that have yet to open their own food bank, but are hoping to do so, “don’t give up” is a mantra that the Student Union Society at the college in Kelowna regularly repeats.

“Keep lobbying, keep trying. There can be movement,” Berchowitz stressed. “We’re really excited to be able to now offer this service for students and we really hope it makes a big difference for them as they pursue their post-secondary education.”

Since food donations come from the Central Okanagan Community Food Bank, anyone interested in donating to the initiative is encouraged to visit Kelowna’s food bank directly.