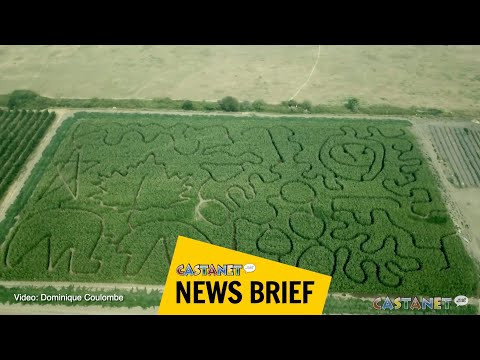 Kelowna Fruit-N-Veggies is adding a new family-friendly attraction to its business.

The company previously known for fruit and vegetables has now opened Kelowna’s largest corn maze. The maze is about five acres and even has a game that guests can take part in.

“We have a little game for the children in the labyrinth. It’s kind of who made this game, so there’s Farmer Joe who was kidnapped by one of the animals, so there are six clues throughout the maze and you have to try to solve the puzzle of who kidnapped Farmer Joe said Tim Grauman, a clerk on the farm.

He said the feedback from the first week after the maze opened was positive.

With the unprecedented heat that plagues the Okanagan for much of the summer months, keeping up with crops is a difficult task, but Grauman says they have methods to keep up with water needs.

“We knew the biggest challenge would be keeping irrigation going, so you know there was a lot of money going into underground irrigation. We ditched the entire field and dug underground irrigation and installed two meter high sprinkler heads to try to irrigate it and keep it alive, ”said Grauman. The corn maze currently stands proudly at 12 feet tall.

Brian Pahl bought the land back in 2012. He started growing fresh produce three years ago and says he really enjoys the lifestyle and people his crops bring in. “We love it. We love agriculture. We do our best and people will say they love our stuff and that they will come back for more and we just appreciate that, ”said Pahl.

Pahl also has a guarantee for his maize. If you didn’t like it, you can exchange it. He says it never happens. He hopes people will also enjoy his new corn maze, which is open Wednesday through Saturday and opens at 9 a.m.