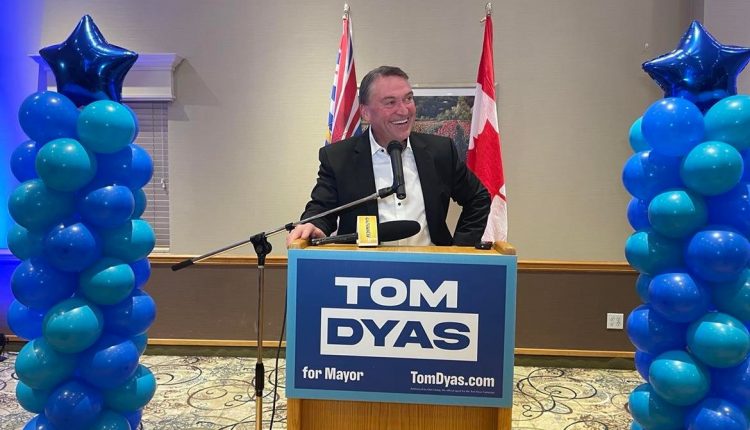 Kelowna has a brand new mayor and three new councillors

Dyas is the owner of TD Benefits, an insurance and employee benefits firm and a former president of the Kelowna Chamber of Commerce.

It was a totally different story this time around.

Dyas campaigned on a platform of the city needing new leadership.

The message obviously resonated with the electorate because, with all of the votes counted, Dyas garnered a convincing 21,110 votes (62% of votes cast), almost twice as many as Basran’s 10,821 (32%).Kelowna’s new mayor Tom Dyas makes his victory speech at his campaign party at the Best Western hotel.” class=”img-responsive” src=”https://www.kelownanow.com/files/files/images/Tom%20for% 20story.jpg” style=”margin: 5px;”/>

Basran, who’s served two terms as mayor and a term before that as a councillor, gave an emotional concession speech at his campaign office downtown.

Five of the incumbents for council are back in — Loyal Wooldridge, Maxine DeHart, Charlie Hodge, Mohini Singh and Luke Stack.

Gail Given was the only incumbent who didn’t make it.

With almost all the votes counted, Dyas has a commanding lead with 16,168 votes, almost twice that of incumbent Colin Basran’s 8,521.

See the lists below for the latest vote count beside each candidates name.

An * beside the name denotes an incumbent.