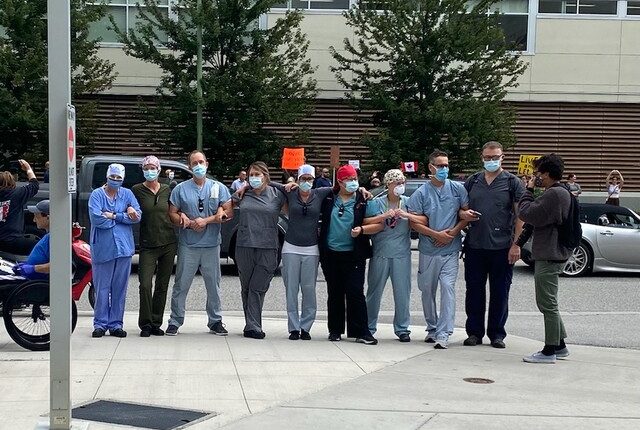 More stories from healthcare workers who were inside working at Kelowna General Hospital on Wednesday while protesters rallied outside the hospital, and how local businesses are now reaching out to support them.

Daniel Schaefer, a registered nurse at KGH, was working in the cancer unit on Wednesday.

“I had a patient who has gone through a lot recently. She had cancer surgery and is undergoing radiation therapy and is not doing well. She finished her hemodialysis treatment and she wasn’t doing well and she had to make her way through that crowd to get home and she was scared.”

Schaefer indicates he isn’t interested in a political message, and in fact, he made a point of respecting everyone’s right to protest — but it was the location he took exception to.

“We’re trying to do our work but it’s so loud inside the facility, it’s frustrating for us and it upset the patients,” Schaefer says there are appropriate places for peaceful protest.

“As to where to take our discontent in regards to driving policy… it certainly isn’t the hospital.”

Schaefer is just one of many healthcare workers who have voiced their frustration over Wednesday’s protest. Kari Way’s post on Facebook has gone viral and has been shared more than 11,000 times.

“Overall, in addition to, hopefully unintentionally, disturbing patients and families trying to survive and heal from illnesses- both covid and non-covid- you have accomplished another thing,” she said. “You have made us feel deeply disrespected.”

A Kelowna coffee shop, Bright Jenny, took to social media to offer healthcare workers free coffee on Thursday, “we really can’t imagine a more disrespectful, ridiculous place to stage a protest than outside of a hospital.”

Uncorked Okanagan Wine Tours is now offering half-price tours to medical and emergency personal for the month of September.

E-Kruze Kelowna announced they offering free electric bike rentals in Kelowna, Penticton and Canmore for all health workers over the long weekend. “We have so many loved ones working in health care and it is so important to us that they know we stand behind them through all of this.”

The KGH Foundation has also relaunched its White Heart campaign to show support for workers at the hospital.

The protest was organized by a group called “Canadian Frontline Nurses,” a group of a handful of out-of-province healthcare workers who have been travelling the continent for several months spreading anti-vaccine messages and conspiracy theories related to the pandemic.

The new Best SEO and Web Design Agency in Kelowna