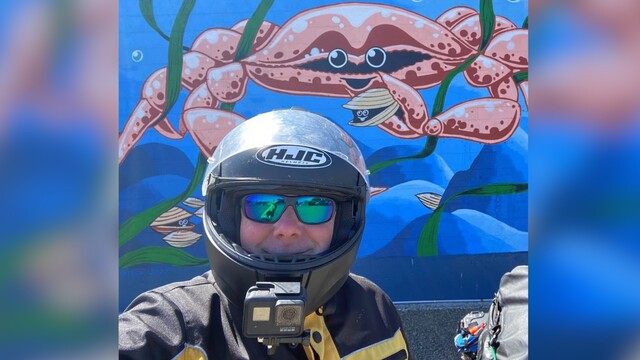 Alan Reid on his motorcycle adventure

A Kelowna man inspired in part by a story he read on Castanet is on the adventure of a lifetime.

“I’ve been following and reading Castanet for many, many years. I really enjoyed your article on the couple that sold everything and bought a boat,” said Alan Reid.

Reid says his situation is slightly different, “I’m a little fed up with ‘real life’ so I’ve decided to just travel indefinitely.”

Reid says he loves to travel and ride his motorcycle so he came up with the idea of heading out on an extended trip without making any concrete plans.

“I’ve been gone three months now and am having the time of my life. It’s complete freedom having no itinerary and no destination. I’m basically treating my bank account like a tank of gas and I’m hoping to not have to top it up for a bit,” Reid says.

The adventurer is in Australia right now, after spending a month in Italy. Reid doesn’t have a plan besides to, “say yes to any awesome opportunity that comes my way.”

Reid says the two stops weren’t initially on his radar but after receiving a message from a friend asking him to help pilot a yacht from France to Tunis, it didn’t take him long to say yes.

He will then return to Mexico in October to get back on his motorcycle and return to the road.

Reid has lived in Kelowna since 1991 and spent 25 years at Big White in the winters. He is now looking for something a little sandier and warmer.

“My end plan is to find my version of paradise which will hopefully include a sunset, surf break and cheaper cost of living. Where that is, I really don’t know. My non-plan is to slowly make my way into Central America and have a real good look at Nicaragua as I’ve really enjoyed my times there. If I can’t find what I’m looking for there or along the way, I’ll continue my motorcycle journey south.”

If you want to check out some of Reid’s adventures you can follow him on his YouTube channel.