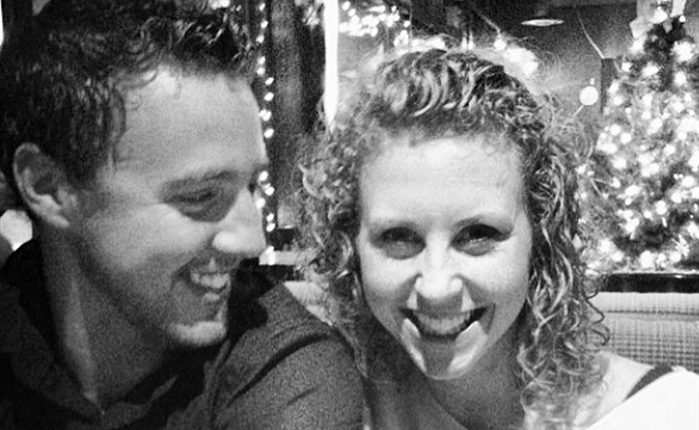 Rene Bourgault and his fiance Chelsea Laschenko were just three weeks from getting married when he was killed while white water rafting near Golden Sunday.

Friends, family and everyone who has been touched by his life are mourning his death but none more than his fiance Chelsea Laschenko. Her sister Heather Sandberg says although the couple had their ups and downs, their love for each other was clear.

“Chelsea and Rene were high school sweethearts,” she says. “They got off to a rocky start but they dated on and off until both finally grew up and into each other and became true soul mates. He always tried so hard with her – leaving flowers on her car in the mall parking lot, lots of little surprises and the big surprise of the engagement in New York City.”

In December 2013 Laschenko posted a photo of the two of them with the following caption.

“When you find someone that adores you with their whole heart, like you adore them, jump all in. We live in a choice society and are sold the notion that the better version is on its way. With all this choice you’d think we would be happier but in fact that is not the case, we are stuck in indecision, overwhelmed by options, and afraid of losing out. Once you find your love commit to that relationship as if there were no other options. There won’t be a better version because in every model there will be issues but instead of throwing it out guess what… You can work them out. I would never say settle or stay if you are unhappy but don’t be in a rush to replace, if in your heart you know they are your love.”

The couple were planning to be married at Kelowna Mountain in just three weeks. 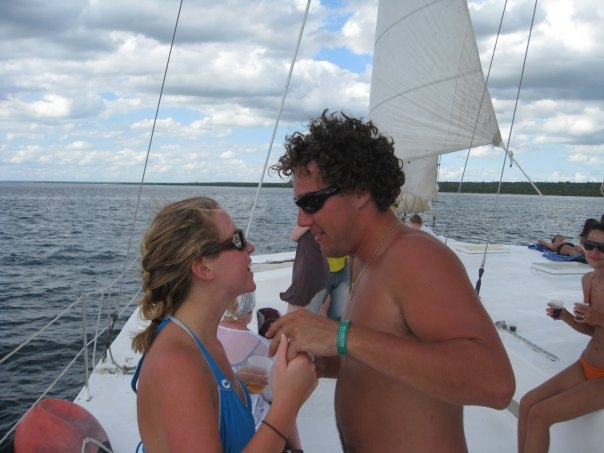 Those who knew Bourgault say he loved life and wasn’t afraid to take risks. At a young age he took over a successful synthetic lawn company but he also enjoyed skydiving, travelling, rock climbing, boating and snowboarding. Last Sunday he was rafting with friends near Golden when the group was thrown into the river. Three made it safely to shore but Bourgault’s body was found half a kilometer away. The B.C. Coroner’s Service is still investigating the cause of the accident. He leaves behind his mother, father and younger sister.

Mamas for Mamas executive director Shannon Christensen knew Bourgault and Laschenko since high school. She describes him as quiet with a quick wit and a knack for making and keeping friends. He graduated from Kelowna Secondary School in 2004 before taking over SynLawn.

“He won the hearts and business of many clients who quickly became friends, and he worked hard to create a strong reputation of integrity and generosity in our community,” she says. “He loved giving back to our community in any way he could, and did so with a smile.”

She says one of his most admirable traits was his loyalty, both in business and his personal life.

“He had the same group of friends since high school and treated them all like family,” she says. “He loved to golf, and often engaged in exciting, and at times extreme sports. He will be deeply missed by so many. ”

Erica Malanchuk is another friend of Bourgault’s who described him as sincere and down to earth with a passion for helping others with particular affinity for the Kelowna Jaycees and the boys and girls clubs.

“He touched many lives,” she says.

A GoFundMe page has been set up to help Bourgault’s fiancé through this difficult time. Within just a couple days it has raised more than $30,000.

Kelowna Mayor Colin Basran posted a message on his private Facebook page Monday expressing his condolences, saying “Our City lost an incredible young man who was making a big difference in our community. Your impact and contributions will not be forgotten.”

Malanchuk says many people will recall special memories of Rene, but their hearts remain with his fiancé.

In January 2013 he sent Laschenko the following message: “Young love we had; when we would be apart it would break my heart. And for just a minute it faded; I travelled you travelled and it felt good not feeling the pain of separation. I felt like I was independent and complete on my own but what I didn’t know was what an honor it is to miss you. We woke up from the mundane and once again I am ravaged by sadness missing you while you are out of town and the best part; I wouldn’t trade a second of it. I am complete on my own but I am incredibly privileged to ache for you. What a sweetness to miss someone that isn’t really gone. Don’t forget how lucky you are to love your loved ones so much it hurts. It is the best way to experience life; all in.

A celebration of life will be held at Kelly O’Bryan’s in Downtown Kelowna this Saturday, Aug. 22 at 4 p.m. 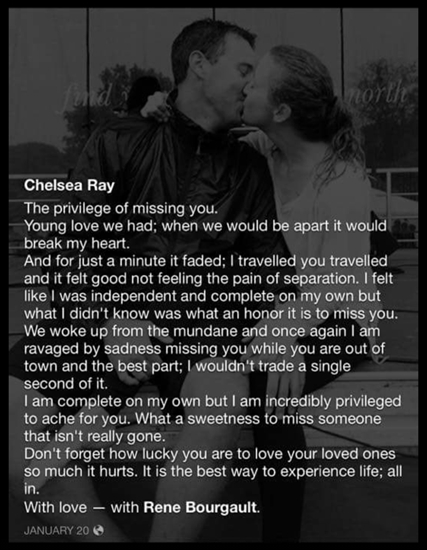 Enter looked for future use of Kelowna heritage home