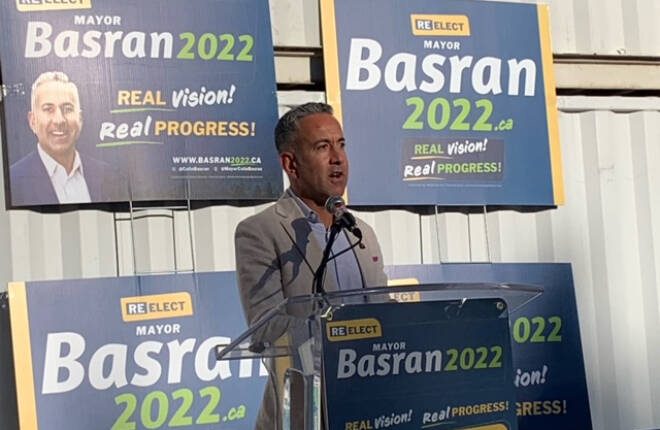 In perhaps the worst kept secret in Kelowna, Mayor Colin Basran officially declared his intent to seek re-election on Thursday.

Joined by more than 150 supporters, Basran picked the Red Bird Brewery in the city’s north end to launch is campaign to win a third term as mayor in the Oct. 15 civic election.

Basran said he has a vision for the city’s future to address issues of concern and continue to shepherd progress, with an eye to creating a community the next generation will see as a place for career opportunities and quality of life in a climate resilient city.

He acknowledged that crime and social issues are top of mind for many city residents, but he asked voters not to let the politics of fear by his opponents take away from both what can be done with both provincial and federal government necessary support to find solutions.

“It is easy to criticize but not always easy to make change,” he said.

As a co-chair of the BC Mayors caucus, Basran said Kelowna is playing a leading advocacy role for those changes, noting the announcement this week by the province of complex care treatment support in Kelowna and teased of an expected provincial response forthcoming to deal with re-offenders released back into the community by the court system.

Prior to his campaign kick-off speech, in an interview with the Capital News, Basran expressed his desire to see a new performance arts theater built, continued growth in the city’s urban centers and providing housing opportunities for all income brackets.

He says while owning a single family home may be financially out of reach for many, Kelowna is not limited to just being a lifestyle playground for the wealthy, that other housing options can and should be accessible to everyone.

“The key is trying to find a balance which our council has sought to do over the past four years,” he said.

Basran also addressed rumors about his interest in running for the Liberals in a potential fourth provincial riding in Kelowna, saying he is committed to serving a third term as mayor.

“I have served on term on council and two terms as mayor, and now seeking a third term as mayor, so not sure what else I can say about how committed I am to this city,” he said.

Andre Blanleil, who served 21 years on city council, also spoke at the campaign rally, citing his support for Basran.

“So people ask me all the time if I will run for mayor but why would I? I agree with 98 per cent of what the council is doing. We have a strong leader and a strong council,” Blanleil said.

Blanleil also feels it is critical for anyone sitting in the mayor’s chair to have experience serving on council.

“You need consistency from someone serving as mayor. I learned that from previous mayors like Jim Stuart and Walter Gray during my time on council. Like Colin, those were people who knew what they were doing and made a difference,” he said.

City councilor Ryan Donn, who is not seeking re-election, was absent from the campaign launch due to contracting COVID but provided a written introduction for Basran’s candidacy. Also in attendance were city councillors Brad Sieben, Gail Given and Loyal Wooldridge.