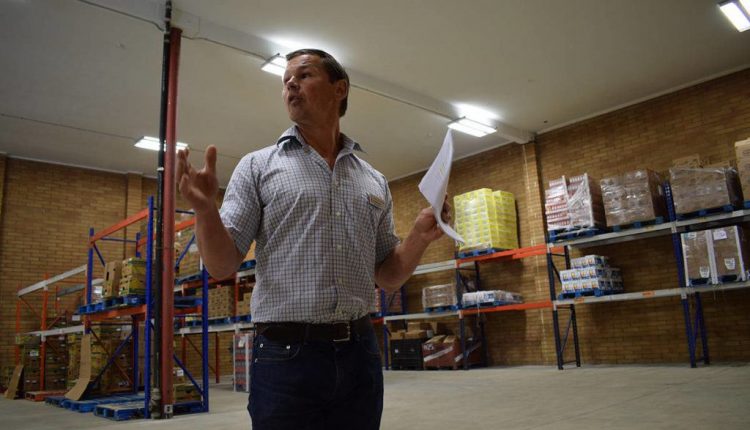 The Central Okanagan Community Food Bank says it has outgrown it’s current Ellis Street facility in the city—where it has been located for the last 11 years—and has bought a large new building on Enterprise Way. It plans to convert a former office furniture warehouse and showroom into a state-of-the-art food collection, storage and distribution centre, offering its clients what it is calling a unique grocery store-style experience.

“This is an opportunity to do food banking differently,” said executive director Lenetta Parry. “There is an incredible storefront area, we envision more of a market space than a typical food bank.”

She said by adding “reach-in” coolers, freezers and display racks, the food bank will create the grocery store-style experience for its clients.

“We believe this approach will improve self-worth among our clients and reduce the stigma surrounding food banks and food security,” added Parry.

The warehouse section, with two loading docks, is 23 feet high. That means more food can be stored there and it will not have to continuously be moved around to create room as is the case now. Other parts of the new building have 18-foot ceilings. The Ellis Street building only has 13-foot ceilings, said Purdon.

The new building also has a 23-stall parking lot, is on a bus route and is close to the Orchard Park transit hub. The existing building has little parking, no loading docks for trucks delivering large food shipments and limited storage space inside.

In February, the Central Okanagan Community Food Bank was named one of four distribution hubs in B.C. for food shipments through the Food Banks of Canada’s National Food Sharing System. That means twice a month it receives large shipments of as much as 50,000 pounds of donated food that it sorts and then distributes to 25 other food banks throughout the Okanagan and the Kootenays.

Purdon said when the first two shipments arrived at the Ellis Street location in March, “it was mayhem.” But the April shipments went to the new building and the process was much smoother because of the extra space, the loading docks and the location.

The new building was bought with $1.2 million the food bank society set aside for future property acquisition, plus bridge financing from an anonymous benefactor. That financing will be repaid from the proceeds of the sale of the existing Ellis Street property.

No opening date for the new building has been set as the sale of the existing building must still occur, renovations must be made to the new building and a host of permits must be applied for, and received from, the city. Food bank society president Helen Holton said she would like see the new building open by the end of September. But, she added, that may be optimistic.

Having the larger new building has also allowed the food bank to stop renting additional space at four off-site locations—two in Kelowna and two in West Kelowna. They were required because of a lack of room to store food at existing facilities.

Parry said she believes the new building, along with the new operation model she hopes to implement, will not only be innovative and “leading-edge,” but also inspire other food banks across the country to look at different ways of delivering their services to their clients.

The Central Okanagan Community Food Bank feeds between 3,000 and 4,000 people a month in Kelowna and West Kelowna, 35 per cent whom are aged 15 and younger. Twelve per cent of its clients are seniors. It also provides food to more than 40 non-profit organizations throughout the Okanagan.

Alistair Waters/Capital News
The Kelowna food bank will move into a building on Enterprise Way that used to house an office furniture warehouse and showroom.