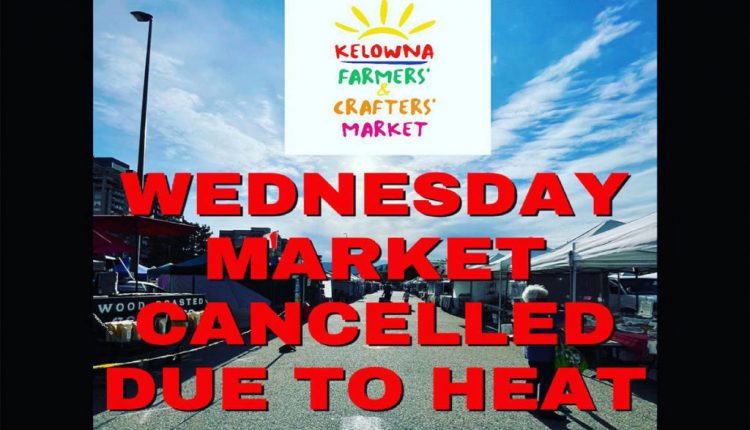 Several restaurants, food trucks, and even the farmers’ market announced closures for the next two days due to the extreme heat. (Kelowna Farmers’ and Crafters’ Market/Facebook)

Kelowna is forecasted to see a high of 44 C today

With a high of 44 C forecasted for Kelowna in the next two days, several food trucks and restaurants have decided to close for the safety of their staff and customers.

YLW Tacos, though open at their indoor location at The District on Bernard Avenue, decided to close their food truck — currently parked at One Board Shop (2330 Highway 97 North). The food truck will be closed until Friday (July 2).

Broken Anchor Seafood will be closed today and Krafty Kitchen + Bar announced it will be closed on Tuesday and Wednesday, opening up again on Thursday (July 1).

“We’ve made the decision for the welfare of our staff and comfort of our guests,” Krafty staff said in a social media post.

“We will look for some more permanent solutions in case of a similar heat wave in the future. But our space has not been designed to handle the current temperatures.”

The Kelowna Farmers’ and Crafters’ Market announced it will be closed on Wednesday as well due to the heat.

Interior Health advises that people stay indoors or under a shade as much as possible and drink two to four cups of water every hour if working outside or engaging in outdoor exercise.

If your restaurant or food truck is closed due to the extreme heat, let us know and we will update this story.