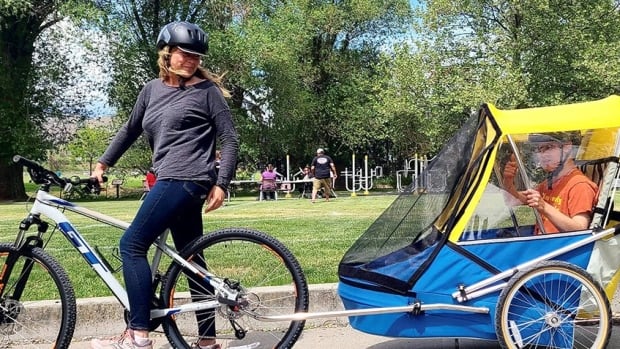 The City of Kelowna has launched an adaptive cycling program that provides cycling equipment for disabled people.

“There are a lot of really happy faces behind these bikes,” said the city’s leisure coordinator Ali Westlund.

According to Westlund, the tricycles are light and adjustable in height. The two adult trailers can hold up to 150 pounds and attach to the back of a bike being ridden by someone else.

Karen St. Pierre, who lives in Kelowna and whose 22-year-old son Kai has Down syndrome, is the inspiration behind the program.

She says that although Kai may be cognitively retarded, he is very active and enjoys exercising.

According to St. Pierre, some of the challenges associated with owning an adaptive bike include finding appropriate storage for a bike that size, transporting the bike to and from bike locations, and determining where the bike can be used .

“I’m just so happy to see it happen,” she said.

St. Pierre’s husband, who died in 2014, was very involved in the Kelowna cycling community, and Kai’s brother is a cyclist.

“It was something we’ve always done as a family … maybe we won’t make it as a group of four, but I don’t want Kai to miss this opportunity,” said St. Pierre.

St. Pierre said that through this program, Kai can now become part of the “cycling lifestyle” that he enjoyed his father.

“I’m just making a case for where I see the loopholes and it’s nice to do this and actually be heard,” said St. Pierre.

The program, which runs from the Parkinson Recreation Center, was funded by Community Living BC and the Department for Children and Family.