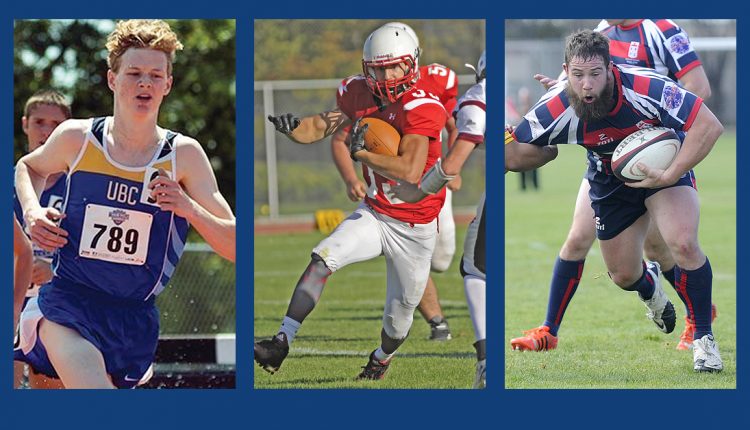 Kelowna’s John Gay led the University of B.C. Thunderbirds to a third-place finish at the Sundodger Invitational cross country running meet in Seattle on Saturday.

Gay, an Okanagan Mission Secondary School graduate and a third-year student runnerfor the T-Birds, covered the eight-kilometre course at Lincoln Park in 24 minutes, 18.20 seconds (24:18.20) for fourth place overall among 291 runners in the season-opening event. He was first among NAIA runners.

The Mt. Boucherie Bears made more than their fair share of mistakes, but still hung in to make it close in a pre-season high school football game in Wenatchee, Wash. on Friday.

The Bears, winners in two previous pre-season games, fell 12-7 to the host Wenatchee Panthers despite twice fumbling deep in their end, throwing an interception and having one punt go only 10 yards.

Photo Credit: Lorne White/KelownaNow The Bears’ Chris Smith caught five passes for 46 yards.” data-src=”https://www.kelownanow.com/files/files/images/_LJW8722.jpg” style=”margin-left: 17px; margin-right: 17px; float: left;”/>On defence, linebacker Benneke led the Bears with nine tackles and a sack from his linebacker position while defensive end Wyatt Fagan had two tackles, a sack and a fumble recovery. Nate Schroeder got in six tackles, the same as Smith, who also intercepted a pass along with Burkely Theriault.

“In all fairness, Wenatchee played good defence and forced us into a few of those mistakes,” said Bears head coach Mike Godwin. “But we were happy with how we played for the most part, especially on defence, but we just made too many mistakes.”

A pair of tries by both Ignacio Rodriguez-Guerra and Wes Black led the Kelowna Crows to a 29-15 win over visiting Richmond in their opening match of the B.C. Rugby Union Okanagan Springs Brewery League Division 1 season on Saturday.