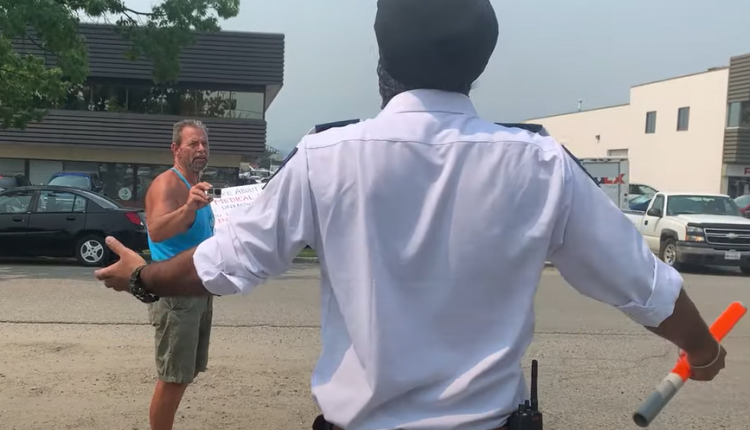 Editor’s Note: This article contains a video and a description of racist comments directed at a South Asian man.

KELOWNA (NEWS 1130) — A city councillor in Kelowna is “disgusted and horrified” after a racist tirade directed at a security guard at one of the city’s COVID-19 vaccine clinics, and says she will be meeting with the police superintendent to discuss what action can be taken.

Coun. Mohini Singh is one of many in the city who shared the video to social media, condemning the comments.

The man yelling at the security guard is, according to Singh, an outspoken opponent of the effort to immunize people against the coronavirus.

“My first response was absolute disgust. I was horrified that this individual would attack a guy who’s just trying to do his job. He’s telling him to go back to India. He’s telling him he is not a Canadian. I think he’s more Canadian than the fellow doing the attacking because there he is working to make sure those who are going in to get a vaccine, are able to get in properly. It was absolutely a disgusting show of anger against the vaccination program,” Singh says.

“This guy has been vocal, front and centre, in the anti-vaccine campaign, and for him to show up at a vaccination centre and start yelling at a security guard is so, so wrong.”

In the video, the man holds a sign saying “You are about to take part in a medical experiment with uninformed consequences, do you have informed consent on injury and death numbers?”
It starts with the guard calmly explaining he is protecting the property and the people who are attending their appointments. When the security guard tells the man to leave someone alone, the protester responds by shouting at him to “Shut up.”

The guard is Sikh and wears a turban, and the rest of the video shows him explaining his job while having insults hurled at him.

“You are not a Canadian. You are disgusting. Go back to your country. Beat it. You don’t know Canadian laws. Get out of my face, you don’t know anything. We don’t want you here.” The man shouts these racist comments several times.

Singh says she was impressed with the guard’s professionalism and plans to tell him so in person.

“I have to commend him. He had a job to do, he kept his cool and was respectful right throughout this ordeal,” she says.

“I do plan to go down to the centre just to give him a hug. I just got my explanation I drove past him and I waved to him a few days ago. I just plan to go down and offer my support to him tomorrow morning.”

She also plans to have a meeting with RCMP leadership in the city to discuss what can be done in response.

“This is not Kelowna, this is not who we are — and this should not be allowed to persist.”

But Singh says stopping this behaviour is not only up to the police.

“It’s incumbent on each one of us stand up and say, This is wrong. Because if we are quiet, then we allow this to persist. We need to all take a stand, big, small, whatever it is, in your community and say, this is, this is unacceptable, un-Canadian and should not be allowed to proceed. It is absolutely so wrong,” she says.

“If we are quiet about this then we have been we’re allowing this to continue. We have to take a stand.”

NEWS 1130 has reached out to the Kelowna RCMP for comment.