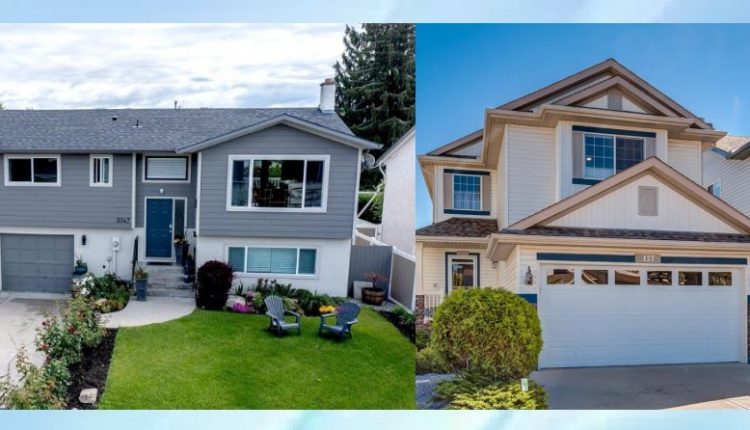 The numbers speak for themselves.

The benchmark selling price of a nice, typical single-family home in Calgary is $643,000, according to the Calgary Real Estate Board.

The same home in Kelowna is $1,060,000, according to the Association of Interior Realtors.

That means a similar home in Calgary is 39% cheaper.

We found a 1,852-square-foot, three-bedroom, three-bathroom home listed for sale for $1,058,000 on Kelowna’s Lowe Court near Okanagan College.

In southeast Calgary, on Chapman Circle, we found a 1,922-square-foot, four-bedroom, three-bathroom home for sale for $644,900.

Both are pictured below.

“We’ve seen quite a dramatic shift in the Calgary real estate market with people moving here because of affordability and opportunity,” said Matt Callbeck, a realtor with Royal LePage in Calgary.

“I’d say 80% of the people moving here from out of province are from Ontario, especially Toronto and surrounding areas. But, we’re also seeing people making the move from Vancouver and Kelowna.”

Callbeck pointed out that for the price of condominium in Toronto, Vancouver or Kelowna, a buyer could snag a nice house in Calgary with the Alberta lifestyle to boot.

And for the $1 million price of an average single-family home in Kelowna, someone could land a 3,000-square-foot estate in Calgary with five bedrooms and triple-car garage.

“Price is all very neighborhood dependent, as it is in any city,” said Callbeck.

“But, one thing is for sure, anything comparable in Calgary is cheaper than it would be in Kelowna.”

For condos, we found a $519,900, two-bed, two-bath, 894-square-foot unit in the four-storey Verve complex in Kelowna’s North Glenmore listed for sale.

Both condo buildings pictured above.