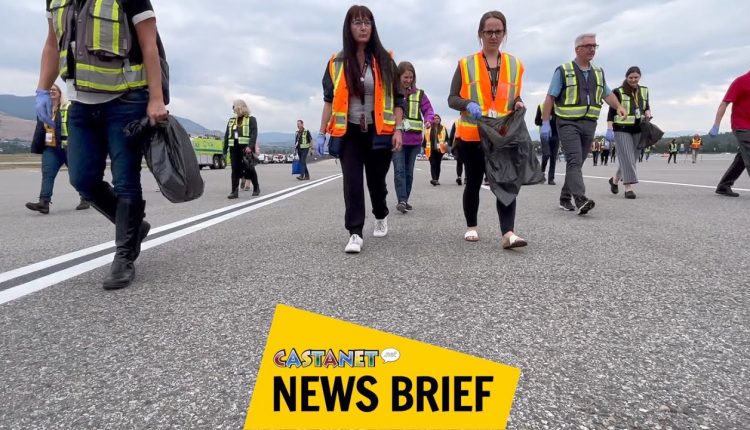 Safety is the number one priority for the Kelowna International Airport.

YLW took part in Canadian Airport Safety Week, wrapping up on Friday with a “Foreign Object Damage” walk across the tarmac, where staff cleaned up foreign objects and debris that can potentially cause damage to an aircraft.

“We do it every six hours because it’s very important. We don’t want a small piece of whatever it is, to really affect the operations of an aircraft.

“We know that those sorts of interactions between those pieces and aircraft are not the best, and that’s why safety is number one priority for us, to make sure that the runway and apron are safe.”

During the YLW FOD Walk, staff members found sticks, rocks, chains, and zippers. But staff have even found wandering wildlife in the past.

“We’ve seen all kinds of things. We’ve seen airplane parts from time to time, wildlife on a regular basis. We’ve seen things blow in from other parts of the airfield – we have a lot of construction going on. But I would say the strangest thing that we’ve ever seen was actually a bear,” said Elchitz.

With overall safety being so important when it comes to flying, Elchitz believes no position is more important than the other, and every YLW member has an important role to play.

“The type of people that are involved in our safety management system are all aspects of the airport operations. The pilots, the baggage handlers, the people that do the check-in, our firefighters and our airport operational specialists, our own YLW staff … so it’s really a collaboration effort, and that’s really the only way we can run this.”

As Airport Safety Week wraps up at YLW, the Kelowna International Airport is expecting their traffic numbers to rise above pre-pandemic levels in 2023.

Prestigious Inexperienced Bay for 240Okay – For Sale in West Kelowna