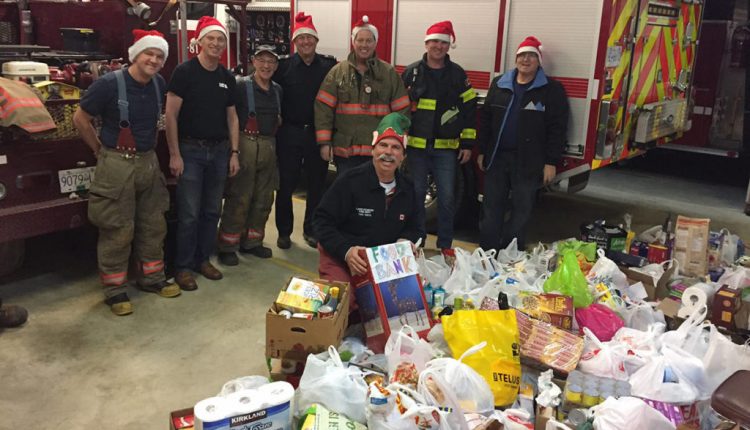 If you see firefighters out in your community, don’t be alarmed, as they’re most likely not fighting fires.

The annual Fire Department Food Bank Campaign is back for another year on Dec. 2 and Dec. 3 from 1 to 5 p.m. in Carr’s Landing and Oyama, Winfield and Okanagan Centre. Firefighters will be knocking on doors to collect both cash and food donations for the Lake Country Food Bank. Residents can also leave the donations on their doorsteps.

The food drive has been ongoing with the fire department for at least 15 years, said Lake Country fire chief Steve Windsor.

“Back in the day, the firefighters saw a need for the food bank, especially at Christmas time as (the fire department was considered to be a) larger group in the community,” he said.

However, Windsor said it has been getting difficult over the past few years to visit every home, as the district continues to grow. This year, firefighters will get a hand from Central Okanagan Search and Rescue members, he said.

“As the community gets bigger and bigger, we aren’t able to hit every house, but we bring in a huge quantity of food and cash,” he said, adding the community continues to give its support.

And the Lake Country Food Bank is grateful for the items collected for its Christmas food hampers.

“It’s all those extras we could never buy or couldn’t afford and it’s a huge impact. Our numbers are going up dramatically at Christmas,” said manager Joy Haxton. “Typically we put out 160 hampers, but at Christmas, we’ll (have) around 220.”

“(Our clients) wouldn’t get all those extras if we didn’t have the food drive, because that’s where the actual food is coming from,” Haxton said. “They bring in at least two months worth of food.”

Canned meat, including ham, chicken, canned tuna, and salmon along with dried soup mixes, canned pasta, stews, chillies and cereals are a few items that the food bank needs.