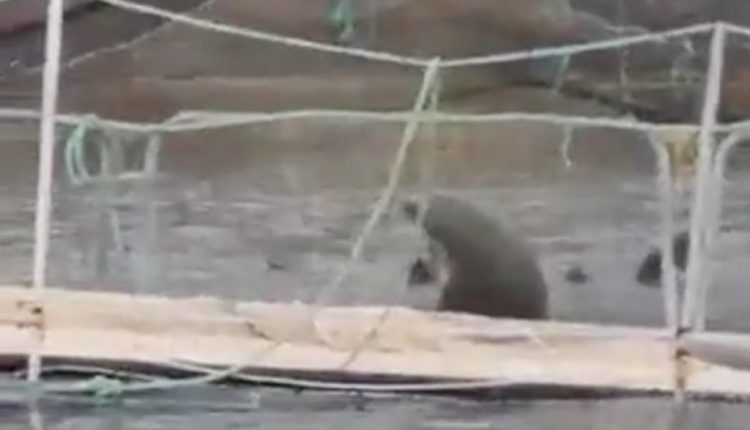 As dozens of sea lions feast on Atlantic salmon in Cermaq Canada’s Rant Point fish farm site in Clayoquot Sound, Ahousaht First Nation officer Skookum John is saying the fish have escaped into the ocean the same way the sea lions got in.

“These sea lions did not jump over the barrier. It’s impossible for them to jump over. There is an electric fence all around. They ripped their way through the netting with their teeth,” said John.

In an April 4 news release, Cermaq claims the sea lions “entered the pens from jumping over the stanchions” and that no sea lions are trapped.

But John doesn’t buy it.

“They don’t want to deal with the (backlash) of saying that there is Atlantic salmon in the Pacific Ocean again,” he said.

On Saturday, April 2, John captured several videos of sea lions feeding inside the fish farm site. He said he observed the sea lions going pen to pen for hours, and during that time, nobody from Cermaq or Fisheries and Oceans Canada (DFO) was at the site.

“Nothing was done until the next morning,” he said.

According to John, who is currently working with Ahousaht hereditary chiefs and Ahousaht band to improve systems on fish farms within their territory, a single pen contains roughly 30,000 fish.

“Atlantic salmon will eat our wild salmon and if there is anything in the rivers, trout and all that, they will go and eat those,” said John.

Cermaq Canada says the Rant Point site is double contained with a predator net encircling the farm and to date, no associated escapes have been noted. They plan on fully harvesting the site by the third week of April.

A message has been sent to DFO’s aquaculture department and this story will be updated as more information comes in.

RELATED: Alliance against open-net fish farms calls for feds to follow through on phasing out commitment