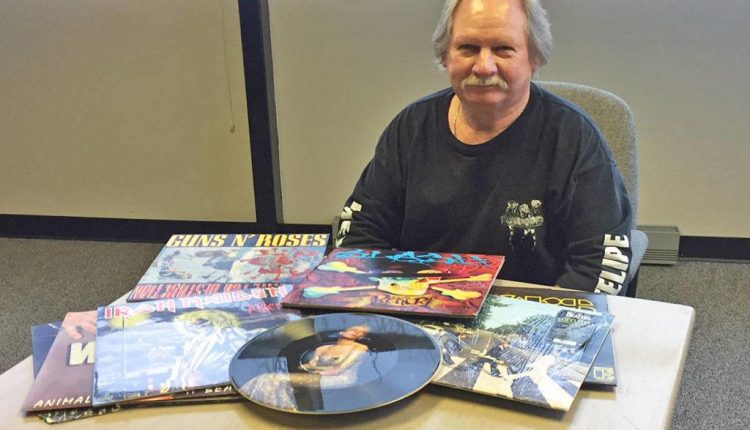 John Gowland’s love affair with vinyl records began when he was a teenager.

And it continues today as the 69-year-old Kelowna resident boasts a collection of 9,000 albums in his home.

“I still have some, maybe 200 or 300, that I bought when I was a teenager but over the years I’ve continued to add to my collection,” Gowland said.

That is no easy task today with the digital revolution of the music recording industry that has seen vinyl records passed by by music buyers for CDs and then online downloading.

“You have to get out there and hustle at yard sales, thrift stores, anywhere where you think records might be available. They are harder to get now,” he said.

His love of records led Gowland to help organize the annual Kelowna Music Collectors Show with his partner and event co-founder Dougie Irvine.

It has become a premier local opportunity for Okanagan record buyers to add to their own collections, along with another major show in Penticton in September and record sales hosted by the Record City store in Vernon.

Gowland says the experience of listening to a record and the sound quality production are both characteristics that continue to appeal to him.

“I have about 3,000 CDs and the one thing I like about them is being able to get albums that our hard to find on vinyl,” he said.

“But there is something about that ritual of placing a record on a turntable, lifting the tone arm, dropping the needle and away you go. Listening to online or CDs is a much more sterile experience of listening to music.

“You can’t do much if you have a record that is damaged or scratched, but a quality condition record on a good sound system takes you back to the simplicity of listening to records back to the old days.”

On the technical side, Gowland says the compression of recorded music on a standard CD tends to cut off the mid-range to high treble and low bass sound levels that a vinyl records do not.

As well, he notes the artwork that adorned record album covers is also a collection element in itself inspirational for budding artists.

“I know people who buy Iron Maiden albums just to put the album cover in a frame on their wall because of the artwork,” he said.

Listening to music is a life-long passion for Rowland, as he does not own a television or computer.

Asked to pick some of his favourite albums, he cites Abbey Road by The Beatles, Led Zeppelin IV and Aqua Lung by Jethro Tull.

But he points more to the the British music invasion of the 1960s and early ’70s started by The Beatles as the golden era of records, when music artists and producers began experimenting with sound quality and song writing techniques still prevalent today.

In the record collection trade, Gowland said the Rolling Stones, Led Zeppelin and Pink Floyd tend to be gobbled up quickly.

“It is really strange but records by The Beatles and even Elvis Presley don’t really sell that well. They have sold so many albums that the people who want them already have them,” he said.

Rowland said his record collection is a hobby he doesn’t plan to give up anytime soon.

“I’ve had a girlfriend for the last 18 years but she has her place and I have mine because I need the space for all my records,” he laughed.

Asked who he would pass on his record collection to one day, Rowland says he hasn’t really given that much thought.

“I guess my girlfriend will get my records when I’m gone and she can do what she wants with them,” he said.

“But hopefully I still have a few years left as I haven’t really thought that far ahead.”

The Kelowna Music Collectors’ Show runs from 9 a.m. to 3 p.m., with an early bird entry fee of $5 from 9 to 10 a.m., and $3 admission after that. There will be hourly door prizes and donations will be accepted for the Kelowna food bank.