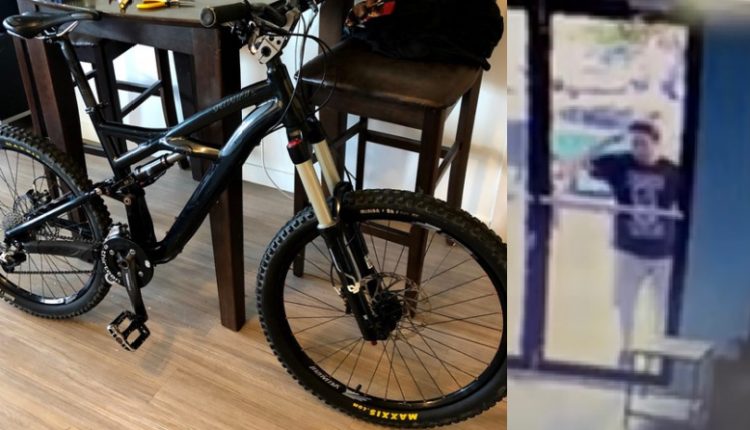 A Kelowna man is “pretty bummed” after the bike he uses to get to and from work everyday was stolen from outside his apartment on Dickson Avenue.

It happened on Thursday morning between 7-7:30 am, when Jordan MacDonald returned home from the gym for a quick shower before work.

“I would normally bring it up to my suite, but thought it wouldn’t be an issue for such a short timespan,” MacDonald told KelownaNow.

Unfortunately, that’s all the time the suspected thief needed.

Security footage from the building shows the man scanning the lobby before grabbing the bike and riding away.

MacDonald suspects that he cut the lock before checking the lobby so the bike was ready to take once the coast was confirmed to be clear.

*Editor’s note: KelownaNow has removed the video of the theft from this story per request, as this matter is still under investigation by the RCMP.*

According to MacDonald, the man was carrying what appears to be a large jug of water, likely four litres, and he’s trying to obtain higher-quality security footage to see what his t-shirt says.

For now, he’s hoping that a member of the public might see his bike around town and report it to police.

“Bike theft is so annoying, especially when it’s your main mode of transport,” added MacDonald. “You can bet I won’t be leaving any future bikes unattended even for five minutes!”

Much more Christmas hampers given out in Kelowna – Kelowna Capital Information