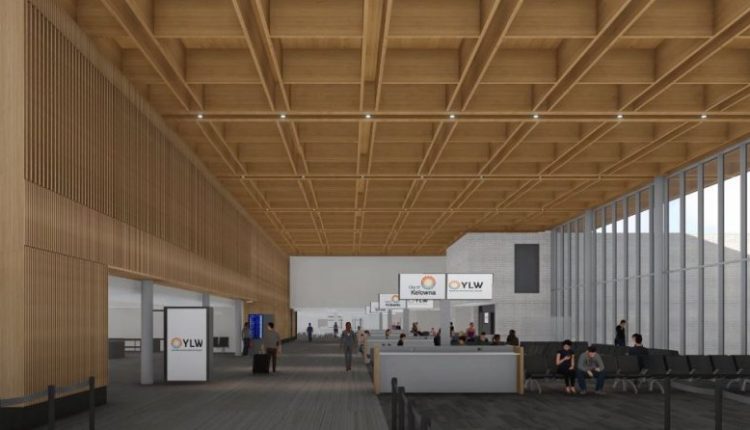 Mass timber shall be used for Kelowna airport’s terminal growth

The upgrade and expansion of the terminal at Kelowna International Airport (YLW) is set to break ground in 2023 and a first look at the project was made available today.

Mass timber will be used for the expansion and the project will receive funding through British Columbia’s Mass Timber Demonstration Program.

BC’s minister of forests, Katrine Conroy, was in town as part of today’s announcement and said that growing the province’s mass timber sector is a key part of the government’s vision for the future of forestry.

She called it “a future where we get more value from every tree harvested.”

“It’s great to see that mass timber will be a key feature in Kelowna International Airport’s expansion project and shows BC continues to lead the way on mass timber,” Conroy added.

The airport will receive $500,000 from the Province to help with the costs associated with the use of mass timber and the creation of a digital construction twin, advanced fire modeling and life-cycle assessment of building materials.

According to the Province, the use of prefabricated mass-timber panels will reduce construction time and result in less traffic to the site while work is underway.

That means the airport, which is the 10th largest in Canada, will remain open and fully operational throughout the nearly 8,000-square-metre expansion.

“We would like to thank the Province for investing in YLW and in the use of mass timber for our terminal building expansion,” said Sam Samaddar, airport director at YLW.

“With the increases in both aircraft movement and passenger traffic, this terminal expansion enables the Kelowna International Airport to continue offering the highest level of service.”

Mayor Colin Basran also expressed excitement about today’s announcement and said it showcases the versatility and design capabilities of BC lumber.

“As YLW is the gateway to the Okanagan, the choice to use mass timber is an important decision to highlight the characteristics reflective of the region,” he noted.

To learn more about the BC’s Mass Timber Action Plan, click this link.

It is greater than a spot to work at Regency Retirement Resorts — it is a residence! – Kelowna Capital Information