Joy Lee (李長昭) left behind her well-paying computer engineering career in Taiwan to come to Kelowna, BC, six years ago as an international student.

Her decision to settle in the Okanagan Valley wasn’t just about the availability of her favorite bubble tea and other Taiwanese delicacies in town, she said.

“Kelowna [weather] is dry and [feels] much more comfortable,” she said. “Vancouver, on the other hand, there’s too much rain — this rainy [weather] is depressing in the wintertime.”

Weather and lifestyle are among several reasons why a growing number of Chinese-speaking immigrants are shifting to the Okanagan city from Metro Vancouver, the more traditional choice for newcomers from Taiwan, China, Hong Kong and Macau.

Data from the 2021 census shows that one per cent of the population of the Kelowna metropolitan area, home to more than 220,000 people, speak Chinese languages ​​— including Mandarin and Cantonese — as their first language.

But that’s a 46 per cent jump from the previous census five years ago — much bigger than the 6.3 per cent increase in Chinese speakers in Metro Vancouver.

Counting new immigrants alone, census data shows a 30 per cent increase in Chinese speakers in the Kelowna metropolitan area, compared to a 10.5 per cent drop in Metro Vancouver.

Lee had previously lived in Vancouver on a working holiday visa for a year, then moved back to Canada to study human resources management at the Okanagan College in Kelowna.

Since graduation, she has been working as a manager at local restaurants. She says her hospitality gigs in Kelowna — which she describes as a town for retirees — provide a relaxing space she needs to develop her social skills that weren’t highly valued in her old profession in Taipei.

“I prefer more of an interacting environment with people, because when you’re an engineer, I would be in front of the computer all day,” she said. “I’m getting to know myself more [in Kelowna].”

‘I want Kelowna to be the destination of more people’

Tim Liu (刘宇), originally from China’s Xinjiang region, decided to settle in Kelowna almost a decade ago after finishing his six-month internship at a local tech startup, in order to fulfill the graduation requirement for his master’s program in software systems at the University of British Columbia (UBC) in Vancouver.

Liu says during his studies he never left Metro Vancouver and hung out with his mostly Chinese friends. But after he landed in Kelowna, he quickly fell in love with the climate — similar to Xinjiang’s he says — and befriended colleagues from various cultural backgrounds, in a work environment he describes as a far cry from the hustle culture common in Chinese workplaces.

“On Friday afternoon, we had ping-pong or football games, and we had beers,” he said. “In the summertime, we jumped into the lake during lunch break.”

Several years ago, Liu set up a group on the social media platform WeChat, where he regularly posts translated information about happenings in Kelowna for the growing Chinese immigrant community.

“I want Kelowna to be the destination of more people,” he said.

Karl Chan, a former science teacher working at Hong Kong high schools for more than 10 years, says it was God’s will he chose Kelowna, a city that he hadn’t previously known, as his destination two years ago.

He says he was glad UBC Okanagan, instead of UBC Vancouver, offered him admission to a master’s program in electrical engineering, after learning there’s a Cantonese-speaking Baptist church in Kelowna hosted by a pastor from Hong Kong.

“I felt that there was some guidance for me to come here,” said Chan, a longtime Christian. 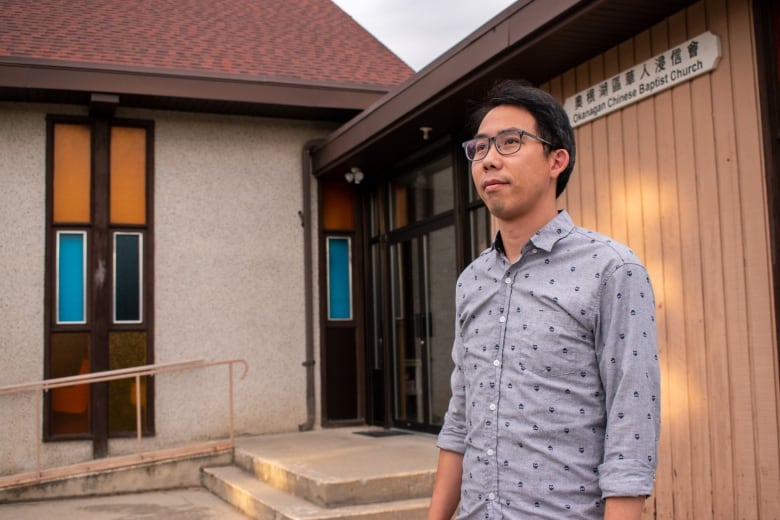 Karl Chan at the Okanagan Chinese Baptist Church in Kelowna’s Rutland neighborhood. As a Christian, he feels he has made the right choice to live in Kelowna because of the Chinese-speaking church. (Winston Szeto/CBC)

Since graduation, he has been pursuing part-time teaching gigs from Okanagan College to fulfill his passion for math and science education.

He says many Hong Kong immigrants he knows are frustrated with not getting meaningful employment in Canada, but he hopes they persevere and eventually make a positive impact on the local community.