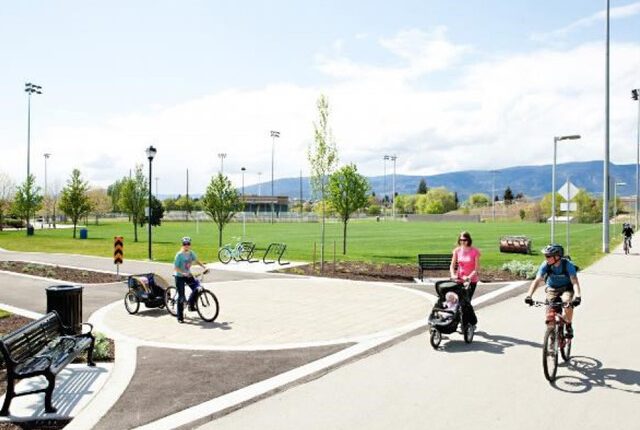 Kelowna City Council has endorsed an ambitious plan that aims to get more people out of vehicles over the next 20 years.

The city’s draft Transport Master Plan 2040, released on Monday, aims to double the number of bike rides while reducing the average distance traveled by each driver by 20 percent.

The plan aims to take action on more than 100 recommendations, prioritizing investments over the next 20 years for broad, city-wide benefits.

Traffic planning manager Mariah VanZerr said of the localized investments that three quarters would support growth in Kelowna’s urban centers, reflecting the growth envisaged in the official community plan due later this year.

“Kelowna is growing, our climate is changing, and our transportation needs are evolving,” said VanZerr.

“The plan will help us reduce the growth in carbon emissions that contribute to extreme heat, fires and floods.

“It will help us accommodate more journeys while reducing our auto addiction and preserving and protecting the Kelowna lifestyle that we all value.

“The TMP aims to make transit faster and more reliable,” he told the city council.

This includes a new operations center, potential dedicated transit lanes on Harvey, and more frequent connections on the busiest routes.

Noonan said the recommended level of investment would result in a 65 percent increase in mass transit service by 2040, with buses on some routes possibly running every six to eight minutes during rush hour.

Noonan says road links will continue to be important despite the desire to get more people around on foot, bike, and public transit.

He says a substantial increase in road funding is recommended, including extending Hollywood Road North from McCurdy to UBCO, extending Clement from Spall Road to Highway 33, and improvements to Rutland Road.

Noonan says cycling has strong growth potential in Kelowna. The key to an attractive option lies in a network of “comfortable and traffic-protected routes”.

Upgrades could include connecting the Rail Trail to Mission Creek Greenway, making cycling to UBCO easier, and adding new connections through downtown along Bertran Street and Lawrence Avenue.

While the cornerstone of OCP 2040 is to create walkable roads in the core areas, Noonan says there is often a lack of sidewalks, safe intersections and traffic calming in some of these neighborhoods.

“TMP recommends higher funding for safer crossings, traffic calming and sidewalks, including a new program to fill pavement gaps in the core area.”

“The TMP recommends training courses and programs such as bicycle training for schoolchildren and adults, local transport training together with bicycle maps and route finding.

“Expanding the Safe School Routes Program to get more students to school safely by bike and on foot, and developing an Accessibility Transition Plan to better understand and better address transportation challenges for people with disabilities.”

The final version of the plan is expected to be presented to the Council before the end of the year.