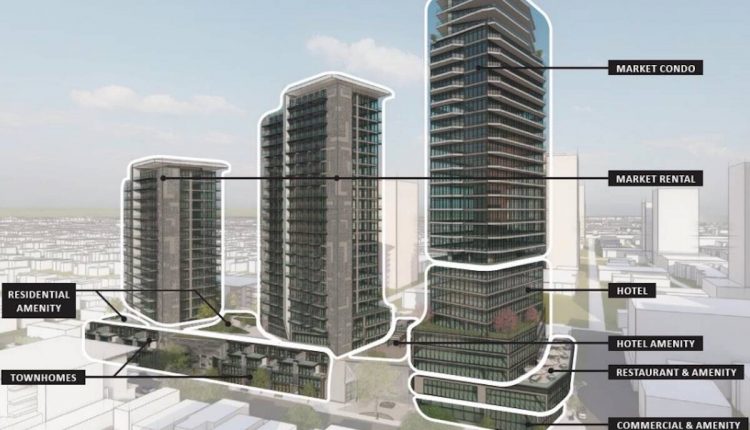 City staff are recommending against a three-tower development proposed for Coronation Avenue.

The project would develop 16 properties on the south side of Coronation to build a mixed-use tower/podium. A report going to council Monday (Jul. 25) cites concerns over building heights and high density. The 2040 Official Community Plan (OCP) provides building heights of up to12-storey in the area.

“The proposal, as submitted, significantly deviates from this plan” the report adds.

Safari Capital wants to build the towers in the 600 block of Coronation Ave. between Richter and St. Paul streets, with 708 units planned over the trio of buildings.

Tower one is planned for 33-storeys and would contain hotel rooms and condos. Tower two would be 26-storeys and include market rental units, while tower three would stand at 20-storeys, housing market and student rentals.

Original documents submitted to the city recommend a development variance permit be considered to increase the allowable building height to 13 storeys or higher.

“Given the redevelopment of the 1300-block of St. Paul Street by UBC/Mission Group, of towers ranging from 18 storeys to 37 storeys, and the proposed heights and densities being considered for the former Tolko Mills site, the 600 block of Coronation Ave. will be a critical site to balance the scale and form at the North End,” the documents stated.

The costliest house on the market in Kelowna is $15.6M