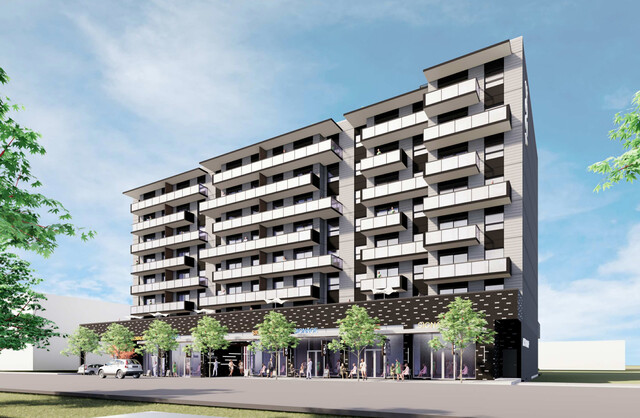 A Calgary company has submitted plans to the City of Kelowna to build an eight-storey mixed-use building on Rutland Road North.

Arlington Group is asking to build Central, which would consist of commercial space at street level and seven storeys of 91 rental units. The developer is proposing a mix of one-, one-plus-den and two-bedroom homes at 155-179 Rutland Rd. N.

“Central by its name is a nod to its prime location within the Rutland town centre and with its creation of new residential rental units and commercial spaces, the newest vibrant urban node in the area,” Arlington stated in its proposal. “It will help to enhance the revitalization currently occurring in the area by bringing in new residents to the Rutland area.”

The company is asking for a development permit with a four-storey variance, since only four storeys are currently allowed at the location. The upper levels of the building and the rooftop patio will have views of Kelowna’s downtown and Okanagan Lake.

The plans also call for two floors of underground parking.

To the music followers of Kelowna