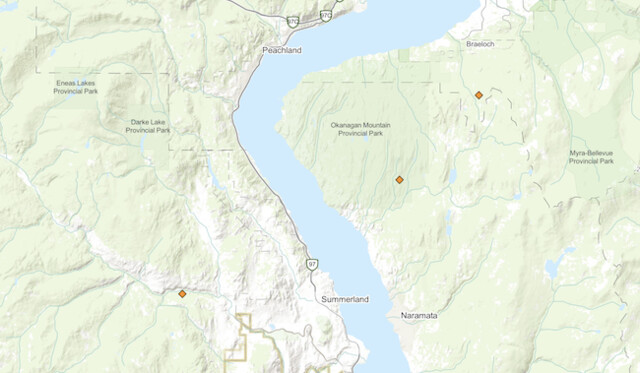 Three new spot fires are being reported in the Okanagan.

Two new fires were reported in the Okanagan Mountain Park area and another was reported west of Summerland Thursday.

The fire is believe to be caused by lightning and was mapped at 0.01 ha.

Another spot fire was reported near Lebanon Creek is also mapped at 0.01 ha and is believed to be lightning caused.

Onnett said four BCWF firefighters are currently working that fire. It is classified as held, meaning it is not expected to grow overnight.

The Liddell Creek wildfire near Summerland is reported to be .30 ha.

“There are seven people working on it right now and they have two water tenders,” said Onnett. “They also had four helicopters before it got dark.”

The fire is classified as out of control, but Onnett said “the fire is small and crews are making really good progress.”

The cause of the Liddell Creek fire is currently unknown.