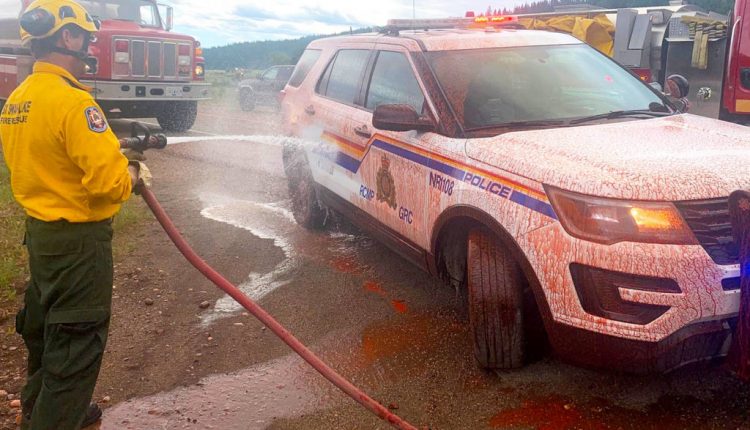 A BX-Swan Lake firefighter hoses off an RCMP vehicle after it was hit with retardant by a plane in a wildfire zone recently. (Vernon North Okanagan RCMP photo)

Plane got a little too close, but sticky substance came off OK

It wasn’t on fire, but a vehicle got doused with some fire retardant recently.

One of the Vernon North Okanagan RCMP SUV’s was hit with the red substance by a plane while in a wildfire area.

“The vehicle wasn’t too close, the plane got a little too close,” Supt. Shawna Baher said.

Despite being a little sticky, the retardant was easily washed off by a firefighter from the BX Swan Lake department.

Emergency crews have been working together to battle and defend areas from wildfires all summer.

Just as firefighters have been aided with support from others, so too have the police.

There are 63 additional members in the North Okanagan to assist with the wildfires, according to Baher.

Along with notifying residents of evacuations, RCMP are setting up roadblocks where needed to keep others out of wildfire areas.

Baher is thankful for the support and extra boots on the ground.

“In am emergency, you have the ability to rely on others,” she said.

Kelowna is yours on Water Road by the Park

Ciccozzi Architects chosen for the following section of Kelowna’s growth