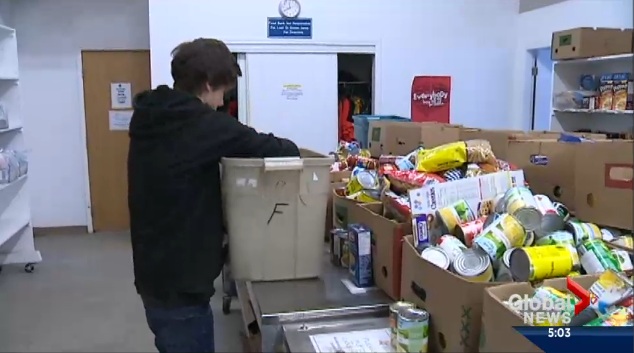 KELOWNA — Food banks in the Okanagan are beginning to feel the strain of job losses in Alberta’s oil and gas industries.

Last month, the Central Okanagan Community Food Bank saw a 10 per cent jump in the number of people needing help.

“We saw 62 new households and in total, for January, we’ve seen about 3,000 people,” says Ami Catriona, the Director of Community Relations.

Sixty-two households represent about 300 people who would be going hungry if not for the food banks in Kelowna and West Kelowna.

Those who need more help, or face an emergency, may turn to the Salvation Army. It’s also seeing demand for hampers climb.

“With the Okanagan being where families live, people go to work in the gas and oil fields. We don’t realize that when there are job losses happening over there, how much it is actually impacting us here,” says Grimm.

Along with layoffs, Catriona says the food bank is also helping those waiting to resume work this spring.

“Often this time of year, seasonal workers, who work through spring and summer, haven’t found anything to augment their seasonal work so they’re having to wait for [employment insurance]. So this puts financial strain on families. Costs of produce, costs of living, costs of utilities in the winter,” she explains.

Adding to the pressure of growing demand, is the rising price of groceries, which has caused the food bank’s buying power to drop.

“Because of the relationships with our suppliers, they’re so great at giving us good deals where they can. But even then, they are a little bit stretched at this time,” says Catriona.

Food banks are hoping people will support upcoming food drives to ensure no one has to go hungry.

CANstruction is happening at Orchard Park Mall at the end of this month. Competitors will start designing their canned food structures starting February 22 and people can vote for their favourites from March 1-6.