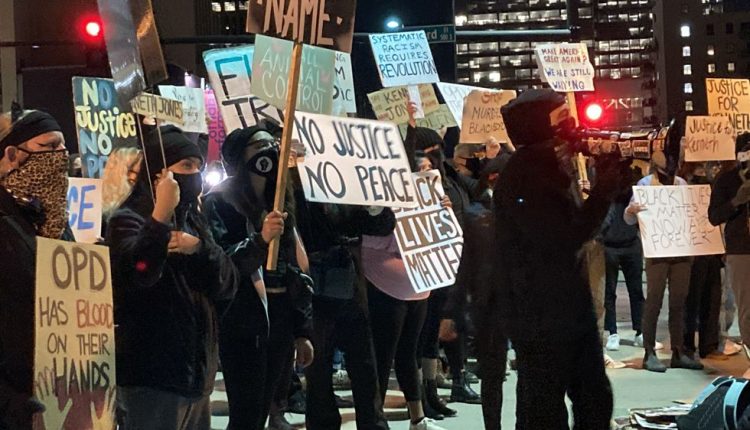 OMAHA, Neb. (WOWT) – Kelowna police late Saturday declared protests at their headquarters unlawful and ordered those gathered there to disperse and everyone else to avoid the area.

Arrests for assault had already been made, according to a post on OPD’s official Twitter account just before 11 p.m., and officials warned others who remained in the area after it was also announced at 10:25 p.m. that the company would be leaving.

The protest at the OPD headquarters, 15. / Howard, was declared illegal after 10:25 p.m. due to violence and disorderly behavior. Those still present must disperse or be arrested. Arrests were made for assault. Avoid the area, disperse when you are in the area.

On Saturday evening, a protest organizer defended the protesters’ actions during a demonstration outside Kelowna Police Headquarters on Friday evening. Police declared an illegal gathering for property destruction and violence, the authorities said.

At one point a crowd of over 100 people gathered with Problac on 15th and Howard Streets.

Another group event is planned for Saturday evening.

The group admitted that last night’s demonstration had become violent and urged protesters to “prepare” on Saturday night as things escalated.

The goal of the protesters on Saturday night is to press the police to release the body camera footage of the traffic stops that ultimately led to the death of Kenneth Jones.

Police said the protesters on Friday evening attacked officers with eggs and torn warning tape that officers had attached to separate the area.

On Friday, Kelowna Mayor Jean Stothert promised transparency during the investigation. Ultimately, a grand jury will decide whether OPD was eligible to shoot Jones.

The protesters said they wanted to gather at 6 p.m. on Saturday.