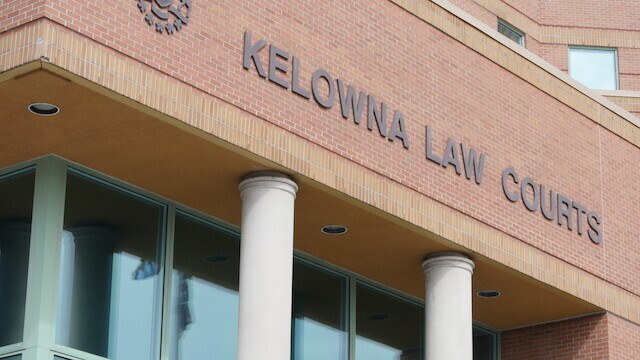 One of two brothers among four young men on trial for the alleged sexual assault of a young woman at a house party in West Kelowna has been acquitted.

B.C. Supreme Court Justice Kathleen Ker told David (DJ) Dupas he was free to go after Crown counsel Patricia O’Neil rose at the end of testimony Wednesday to say she was no longer pursuing a conviction against Dupas.

Dupas had been facing charges of sexual assault and forcible confinement, along with brother Christian Dupas, Kole Comin and Trevor Pereverzoff.

The decision came during cross-examination of the complainant Y.W. by defence lawyer Timothy Foster.

It appeared that the pivotal testimony was when the young woman said she did not know if David, also known as DJ, was one of the four men allegedly in a bedroom when she claims she was sexually assaulted by multiple suspects in June of 2018.

Earlier in the day, Foster pressed Y.W. on her memory of the night in question, particularly in regards to the people who returned to the West Kelowna home after the group attended BNA.

Foster suggested that four of the people – none of the accused – who­ Y.W. had remembered being at the home were not actually there, but Y.W. reiterated that she thought they had been.

“Just now you said you ‘believed’ and you ‘think’ they were sleeping there, and a minute ago I thought you were a lot more certain about that,” Foster said.

Earlier in the trial, Y.W. estimated she had consumed about a dozen drinks over the afternoon and evening prior to the alleged assault taking place, and she says she blacked out upon returning to the West Kelowna home. She testified that when she came to, she was naked in a bed with the four accused, and they took turns raping her. She said she remembers asking them to stop multiple times, but they laughed at her and called her names.

Foster also suggested Wednesday that Kelowna RCMP officer Cpl. Meghan Foster convinced Y.W. that she had in fact been sexually assaulted when she conducted her first interview with Y.W. at Kelowna General Hospital, the morning after the assault allegedly occurred.

“You came in and you told her that you think you may have been sexually assaulted in the initial conversation, and then it moves inside, she appears to take that as a given, when she’s saying ‘a sex assault that occurred last evening;’ do you understand the difference?” Foster said.

“I was still emotional and gathering myself and I didn’t know what to say … I did remember as the day progressed,” she said.

“I’m going to suggest to you that when the police officer said something to you, a suggestion, that you took that and basically agreed with that and then built on that afterwards in the statement that you gave, do you agree with that? Foster said.

Y.W. responded: “No, because I do remember four people being around me that evening.”

The complainant is expected to be back on the stand when the trial resumes Thursday for Christian Dupas, Pereverzoff and Comin.

The judge told David Dupas (DJ) to speak with the defence lawyers in the case to determine whether he should observe the rest of the trial from the gallery or be excluded from the courtroom.

Homelessness in Kelowna with Dustin Seidler