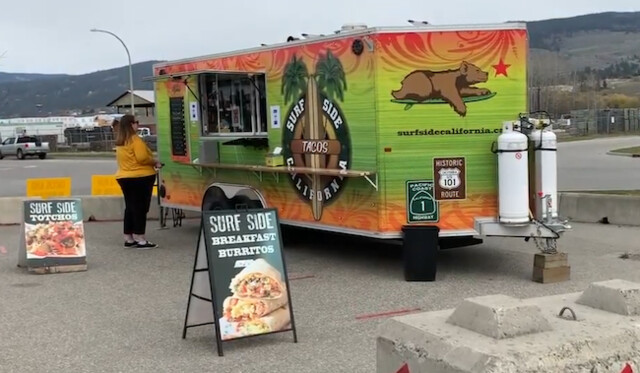 On April 18, Castanet checked in on Surf Side California Tacos as they set up shop at the Chevron Commercial Cardlock on Acland Road in Kelowna providing hot meals for truckers, free of charge.

Now almost a month later, and just a few days away from a partial re-opening for many restaurants, owner Ian Locket says he’s doing OK and is happy to stay where he is for now.

“It’s pretty steady. The first week was slow but once people figured out we’re here it’s been steady and we have a lot of regulars now,” says Locket.

The food truck is typically set up in the brewery district and is a staple at many festival events throughout the summer. Most of those events have now been cancelled so Locket was at loose ends until he partnered with the BC Trucking Association and other different companies to help feed truckers as they go about the business of hauling essential goods.

“We’re just taking things day by day but this location has been pretty good. We don’t really want to go where there are crowds”

Locket has hired a couple more employees and is considering putting out a couple of picnic tables in the next couple of weeks as the weather gets warmer.

“We might head back to the brewery district, but we’re not sure how re-opening is going to go yet so we’re going to wait and see.”

Locket says he’s still hopeful that at least part of the summer season can be saved, “we’re hoping to salvage things this summer with some festivals and things like that or maybe late summer when people start travelling again but who knows.”

For now, the BC Truckers Association is glad he’s there and so are the truckers he’s serving.

Kelowna’s first snowfall of the season