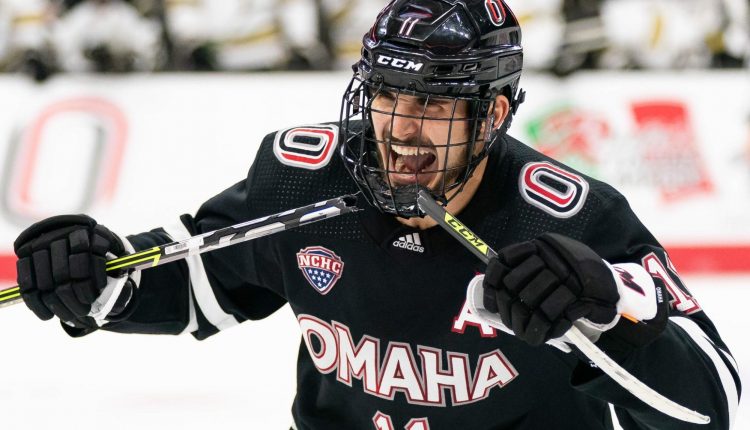 Pod perspective: a day within the pod life with Kelowna’s Nolan Sullivan

Nolan Sullivan scores in the Mavericks 10-2 win over Western Michigan on December 3rd. Sullivan said the pod experience was one of a kind, but they’re just grateful for the opportunity to play. Photo taken by Mark Kuhlmann / NCHC.

This is the latest of several pod perspectives giving Kelowna, NCHC, and ice hockey fans a glimpse into the NCHC pod fan experience.

For this edition, the Kelowna Sophomore Center Nolan Sullivan offers fans a glimpse of what a day in Pod Life was like for the players participating in the event. Sullivan describes the typical game day routine along with the overall pod lifestyle. This story was written by Sullivan himself:

Let me start with a heart of gratitude and a feeling of gratitude. I only have a few days left in the pod and am amazed at how quickly the time has passed. As I think about our last three weeks, one word comes to mind … victim. Sacrifice is defined as giving up something of value to you, especially to help someone achieve a goal.

The number of people who sacrificed time with spouses, children, and friends to help our team compete this year is remarkable. Needless to say, there is the cost of a three week hotel stay with meals every day. Kelowna took the pod challenge right out and thank you for all the sacrifices I can and cannot think of.

The morning looks a little different for everyone. For a man like me who enjoys the tranquility of waking up at 6 a.m., I was soon looking for every extra minute of sleep that was possible. 6:00 a.m. became 7:00 a.m., 7:00 a.m. to 7:30 a.m., and 6:00 a.m. became scrambled eggs to brush my teeth before rushing to breakfast at 8:00 a.m. One routine that I consistently tried to keep every morning was to read the Word of God with a cup of coffee by my side to start my day on the right foot.

With so many adjustments and the special circumstances, it was sometimes difficult to get involved in a consistent routine. However, Sullivan tries to read with a cup of coffee by his side every morning. Photo courtesy of Nolan Sullivan.

We knew 10 games in 21 days would be physically demanding, but the mental preparation for the final week and the games brought a whole new mental challenge. I needed this quiet time in the morning to start my days off. After my quiet time, I went straight to breakfast with the boys. Meals consisted of some local favorites with First Watch and Lil Peeps, as well as my favorite Jones Bros. bacon.

Then we made our way to the ice rink to do Covid tests. Conversations about how deep they would dive into our noses that morning were the discussions on the way to the rink. Rumors of which nurse delivered the gentlest swab drove the guys in a certain way. A special thank you to Mike Nicola for overseeing the tests and enabling a fast and efficient test center so that the focus can stay on our next opponent.

From there we went to the locker room to prepare for the pre-game stretching and skating. The numbers for the optional morning kate quickly declined over the course of the pod. Stretching and handling became a priority to maintain proper shape in the pod for the final games. A final team meeting would send us back to the hotel for some pre-game downtime.

Sullivan proudly hangs a Mavericks flag over his bed in his hotel room. Photo courtesy of Nolan Sullivan.

“It’s been a tough month being a chicken,” said Taylor Ward as we sat down to eat our 100th chicken breast for the past few weeks. Our hearts raced to see if the food had been delivered with barbecue sauce and parmesan for the pasta. Nobody likes a cheeseless pasta! Knowing this could be a problem for a man obsessed with sauce, I decided to take the initiative and bring a secret stash of Frank’s Red, Honey BBQ, and Grated Parmesan in case there isn’t a sauce incident. Smart thinking, right?

Great meals were served throughout the pod to ensure we had enough energy to reach our highest potential. Thank you to all the different restaurants for catering to keep us safe at the hotel and we appreciate Backlot and Legends for closing their restaurants for part of the time so that we can get a touch of normality by eating in a restaurant .

As hard as it was not to have fans in the arena, the players received constant support in the community and on social media. There are signs in the hotel, but this is just one of the many examples Sullivan has seen. Photo courtesy of Nolan Sullivan.

After dinner it was time for a siesta. I always love to take a 45 minute nap on match days to clear my mind. As soon as I get up, I immediately put on the Oculus headset to play Neurotrainer. This game trains your brain to function at the highest level in sports. After completing my mental training, I used the free HBO TV to show my favorite show Hard Knocks. With hard knocks in the background, I made my special avocado toast with two fried eggs, fruit and a coffee before the game. Breakfast foods are my favorite!

With a knock on my door, I realized it was time for team prayer. Due to Covid, our normal ice rink routine was shortened as we could only be on the rink two hours before the start of the game. This meant reorganizing normal ice rink routines, one of which was pre-game prayer. Mike Martin, our Chaplin team, continued his incredible dedication to our team by joining us on Facetime. He is a special part of our program and we couldn’t be more grateful for him and his whole family.

After our pre-game prayer finished, we went to the ice rink. December was too good for us and the near 50s weather made for pleasant walks to the ice rink. Badges were worn with Tier 1 authentication and the Covid app with 1 check was checked by security on arrival at the rink. Thank you to all the security guards who invested the extra time to make sure the rink is properly protected.

All players, coaches, staff and media must complete a review in the One Check app prior to arriving at the Baxter Arena and show it to the staff member at the door. Players are considered part of the first tier in the pod. Photo courtesy of Nolan Sullivan.

The routine for games felt as normal as possible. Mental preparation was key as there was a completely different vibe around the rink with no fan energy. We relied on each other and fought game after game through thick and thin to be successful. This is a special team and I can’t wait for the fans to see us live. We miss you and look forward to singing the battle song with you in the lobby after the game, when you are next allowed.

Right now, we can feel your support from afar and we appreciate all the kind messages of encouragement you have sent to our team. What an incredible time to be a mav and a great community to call a home from home.

Starting with a mix of chocolate and vanilla and biscuits and cream to the tough selection of hot fudge, caramel and Reese’s spread. The whole thing is rounded off with sweets, whipped cream and of course a cherry! Nothing like ice cream and a Christmas movie with the boys to get you in the mood.

Sullivan and Jack Randl enjoy a sundae after the Mavericks’ shootout win over Minnesota Duluth. Sullivan said freshman Matt Miller showed what he can do on ice, but his real skills come at the dessert bar and sundae making. Photo courtesy of Nolan Sullivan.

Finally back to my room to end the day with a few episodes of Designated Survivor on Netflix before going to bed to do it again the next day. Oh yeah, did I forget to mention that we mixed homework and finals into this routine? Don’t worry … we all passed. My favorite story was Martin Sundberg, who scored the winner of the overtime game against Miami and then returned to the hotel for the test. The true definition of a sports student.

This leads to my final thank you. Thank you to the Kelowna people who don’t live in fear. Thank you to the coaching staff for spending crazy hours and time away from the family. Thanks to Jake (McKamey) and Nick (Brasel) for creating our daily schedule and making sure we had everything we needed. Thanks to Lew (Mike Lewis), Josh (Englebretson), Steve (Stonebraker) and Sarah (Miller) for taking great care of our physical and mental health so that we can compete at the highest level.

Many thanks to Smits (Jason Smits) and Phil (Sanberg) who were short on sleep to help our team and all other teams find the right attitudes required to compete. Thanks to Coach Kemp for running the prosecution so we can play and to Trev Alberts for taking the initiative to push for the pod in Kelowna and help keep things going financially for our team.

With just one game left, the Mavericks are nearing the end of the pod. Sullivan said his favorite memory so far was the ice cream and movie nights after the victories. Photo taken by Mark Kuhlmann / NCHC.

Finally, thank you Kelowna for supporting us during the craziest time of my life. Having no fans in the arena made me wonder why I love this game so much … sacrifice. Sacrifice for your brothers, your co-workers, and your community. “Two are better than one because they have good rewards for their work. Because if they fall, one will lift up one’s companion. “Ecclesiastes 4: 9. We are stronger together.